Game Revolution have published an interview with Senior Producer Josh Austin and Head of Communications Michael Cerven from Alien: Blackout’s publisher, D3 Go, in which the duo discuss the inspiration for Alien: Blackout, how D3 Go and Rival Games came together, the Alien’s AI and about the backlash to Blackout’s announcement.

Josh Austin discussed how Fox brought the two companies together following them having similar ideas for a game:

We had the opportunity to pursue an Alien title which is funny because I was watching Alien Covenant and I came up with the basic idea of it. And then [developer] Rival also had a similar idea so we put them together. Fox actually introduced us to work on the title because they had been talking to Rival too. Rival made a game for Thief of Thieves with Robert Kirkman [from The Walking Dead] and they got awards for that title and a good independent studio that [focuses on] quality over everything else.

We thought it would be a good fit so we went for it. [That scene in] Covenant had some similarities to other survival horror mobile games. Let’s try and find a way to make it our own and use the Alien brand to the most potential that we could to keep that fear and the feeling of the first movie. 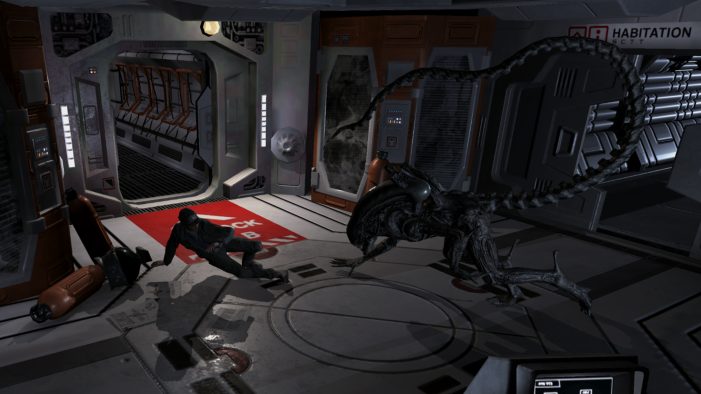 When talking about the Alien’s AI and how it compared to Alien: Isolation’s Alien, Austin told Game Revolution that Blackout’s Alien was indeed a learner like Stompy!

He is dynamic. He learns from what you do and also listens to what you do. He can be relentless and ruthless in this game and we thought that this was a great mechanic for this game. We had a few back and forths on if this game was a little too hard but we kept it this way because it is in an unpredictable killing machine so that’s what we tried to focus on was keeping it super difficult and hard to predict.

On the topic of the fan backlash to Alien: Blackout’s announcement and it not being a console/PC title (or Alien: Isolation 2) Michael Cerven told Game Revolution that fans should be excited for what Cold Iron Studios has in store for us!

I think people should be excited about the game those guys are working on. They spent a lot of time on the [Alien MMO game] and are excited about revealing those details. I don’t know when they’ll reveal those details but hopefully soon. But we’re a separate experience to what those guys are doing. [Blackout] is just one little element to the Alien story. Between the game and all the other stuff Fox is working on, there’s going to a lot more information to learn about Amanda throughout the year.