Ahead of tomorrow’s release day, Alien: Blackout’s Lead Writer – JD Sorvari – has sat down to talk a little about the journey Rival Games took to get to the big release day tomorrow! Sorvari explains that alongside wanting to play in the Alien sandbox, Rival Games also wanted to prove that the mobile was capable of great games with no in-app-purchases. He also explained how the initial pitch meeting with Fox was as scary as facing down the Alien itself!

So how did we end up here? Obviously, we first had to come up with a fresh game idea, as well as a story, and then convince FOX to let us play with their IP. We couldn’t have done it without D3 Go! who were our publisher for Blackout, and brought us together with the right people.

Let me tell you, while the game is scary, it isn’t half as scary as having a dozen FOX executives around a table, waiting for you to pitch an idea to them, so all the support we got from D3 Go! was greatly appreciated. To be fair, those execs turned out to be pretty cool once we got past our initial jitters. Also, working with the FOX franchise department and being involved with the actual Alien canon through them was an amazing thrill in its own right. 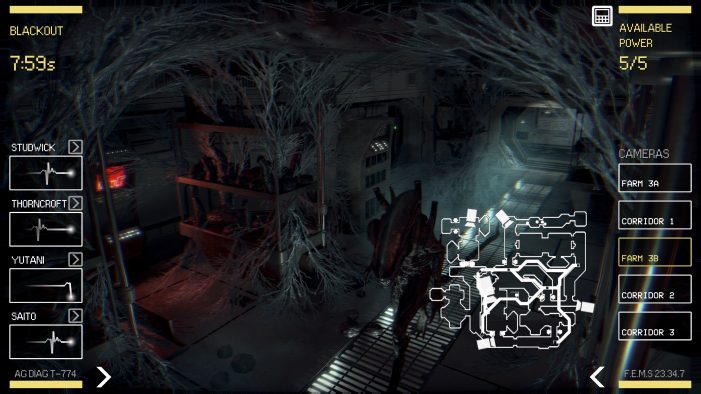 Sorvari also confirmed something fans have been wondering since we heard her voice in that first trailer. Andrea Deck is back as Amanda Ripley!

As for voice talent, D3 Go! also helped us to get most of that together, but it was FOX who provided the linchpin to make this a bonafide Alien experience. And for those wondering, yes, that is Andrea Deck in the game, the one and only Amanda Ripley, reprising her role from Alien: Isolation. It was a fantastic day for everyone involved when we received confirmation that she had signed on for Alien: Blackout.

Blackout’s Lead Writer also re-iterated Rival Game and Fox’s commitment to making Alien: Blackout the best it could be.

Sure, we had some tough days too. For one, we had promised to deliver a premium product, and FOX wasn’t about to let us publish anything less, so rough spots were first sanded, then sandblasted, and finally nuked from orbit to be built again from scratch. I am not a fan of the whole “pressure makes diamonds” thing, but I can’t deny that in this case, it resulted in the most together title we’ve made so far.

Be sure to head on over to D3 Go’s website to check out the article in it’s entirety! Alien: Blackout hits the virtual stores tomorrow for the one-off price of $/£4.99 and is currently available for pre-order on both Android and Apple stores.