I don’t think I would be wrong in stating that the closing scene of The Predator was not a very popular moment in the film. While a lot of the specifics regarding the behind-the-scenes story on The Predator is still unknown, it seemed fairly obvious that it was a last minute studio addition.

And we recently learnt that it could have been much, much worse than it ultimately was with some completely unexplainable cameos from Aliens’ Ripley and Newt. It turns out it’s not just us that felt that way. Responding to a fan’s comment on his Facebook page, The Predator co-writer Fred Dekker revealed that he also hated the scene.

However, most of his comment was related to the reception that The Predator has received as Fred was replying to a viewer who had reconsidered his opinion on the film after watching it on home release and now liked the film more. In response, Fred Dekker said:

Thank you, Stephen. This means a lot to me. We live in a culture that’s so cacophonous we sometimes cling to our opinions as our only voice in the din. Or we’re so married to our childhood memories of things we love that when the formula is contradicted, some feel betrayed by any attempt to take a different approach. In all candor, I have lots of issues with the movie (I also hate the super-suit ending!), but I spent three years on it and to have it trashed by toxic fans who don’t have the first clue how hard it is to get anything on the screen, well…that hurts. So thank you. 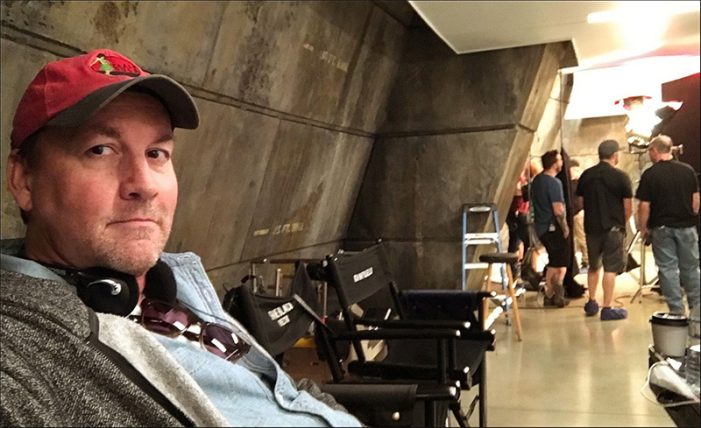 Fred Dekker on the set of The Predator in the Stargazer base.

I typically avoid expressing my own opinions in my reporting (I like to leave those to the podcast) and while I agree that toxicity seems to just be apart of fandoms these days, I also think it is never as simple as fans just being jerks who don’t know how the industry works.

There are certainly elements of The Predator I really enjoyed and elements I strongly disliked, but it never came down to being about The Predator taking a different approach to the material. If anything, that was something I really liked about it. Predator is such a versatile property and it was great to see someone exercising that versatility.

That’s not to say some fans may have disliked The Predator because it was trying to break the formula but ultimately it wasn’t just Predator fans that had issues with the film. The Predator didn’t sit well with the majority of critics either. As of writing, the film currently sits at 44 on Metacritic and 33% on Rotten Tomatoes.

Thanks to HN Entertainment for the news. Keep checking in with Alien vs. Predator Galaxy for the latest on The Predator! You can follow us on Facebook, Twitter, Instagram and YouTube to get the latest on your social media walls. You can also join in with fellow Alien and Predator fans on our forums!