I think it would be fair to say that it is well known that the leaked draft of The Predator that was making the rounds last year featured an ending in which Arnold Schwarzenegger’s Dutch appeared to recruit the surviving characters to his cause. It’s also pretty well known Arnold turned down the role but honestly, how many of us were still expecting him to climb out of that pod at the end of The Predator?

It’s starting to look like the Predator Killer suit was not always the occupant of Pod 03. That’s not to say it would have been Dutch, as the props below look purposefully designed to obscure the face, but from the comments the artists are making, this was from an alternate ending to The Predator!

Jon K. Miller and Sara Villarreal both shared some really cool photos of an interesting prop that we never saw in the finished film. 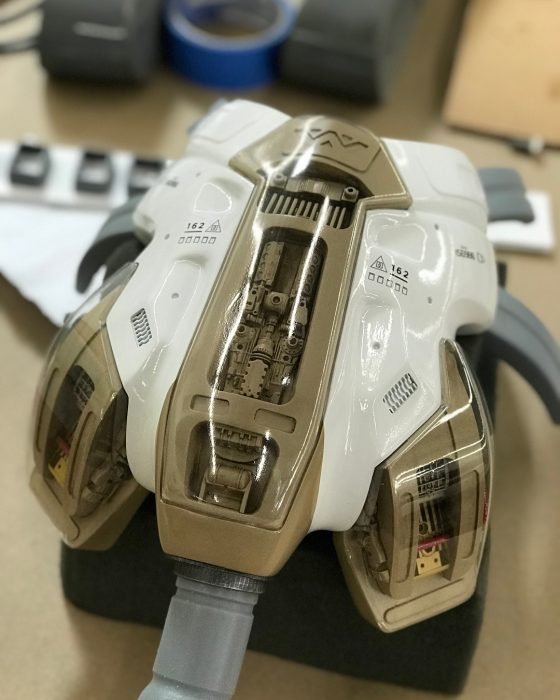 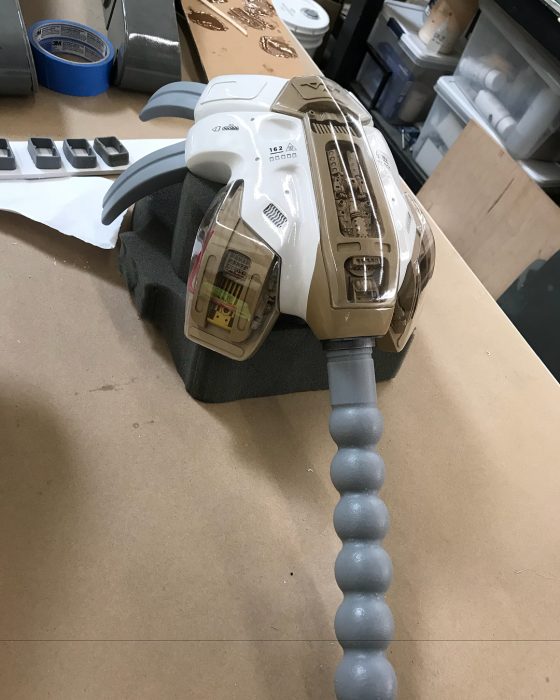 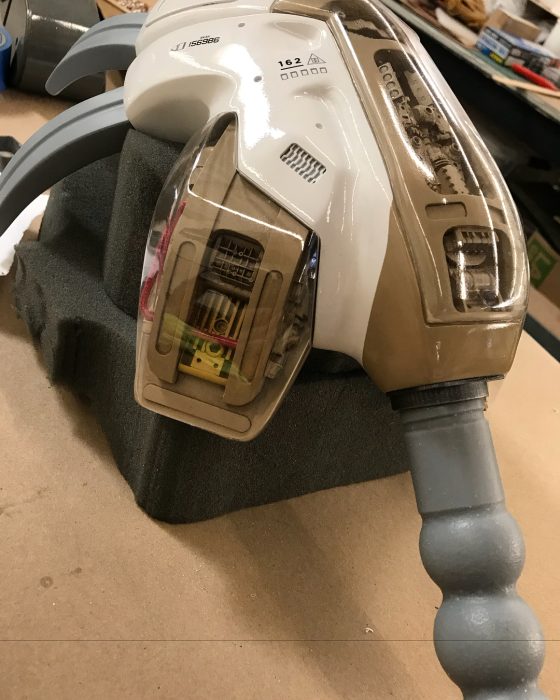 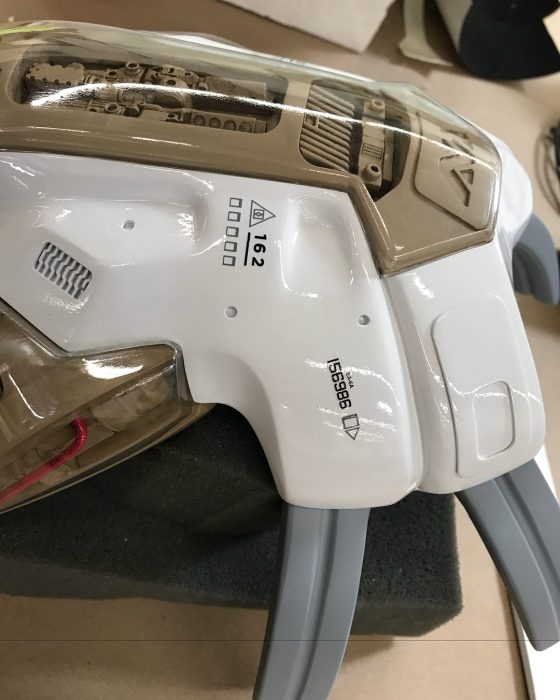 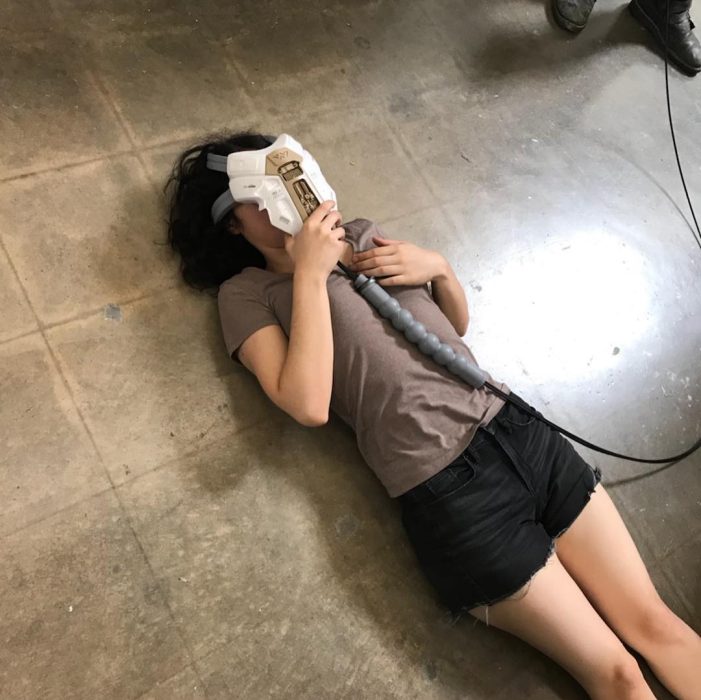 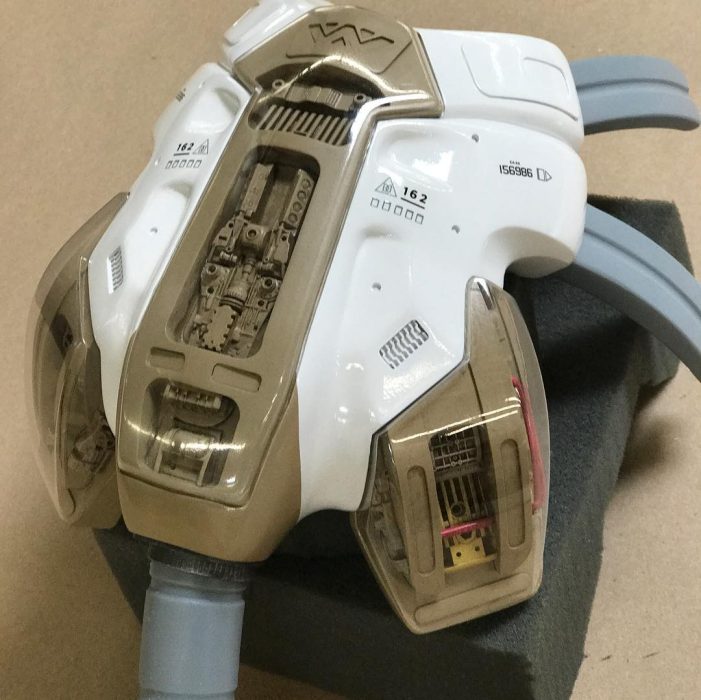 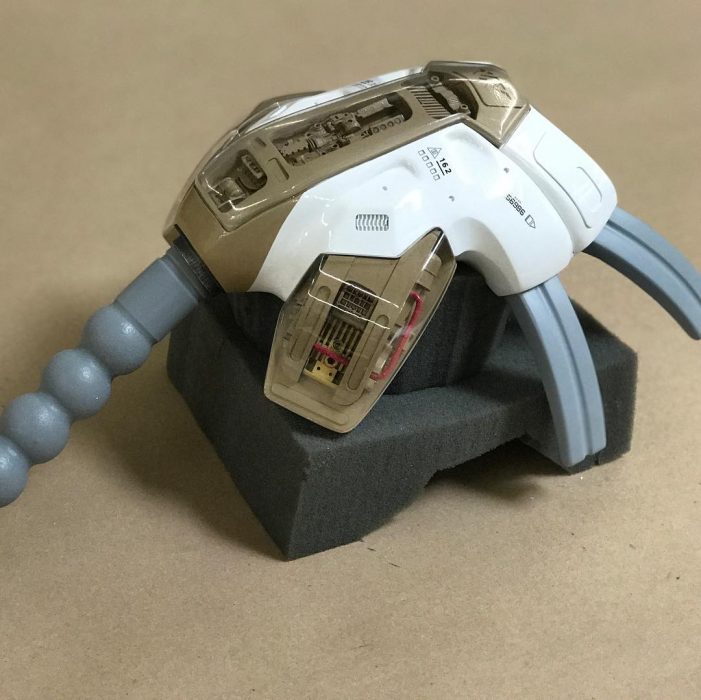 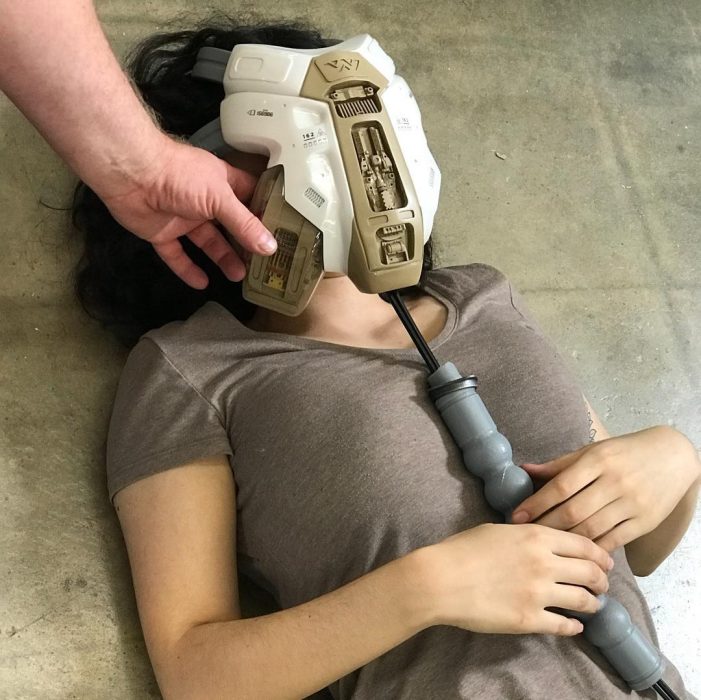 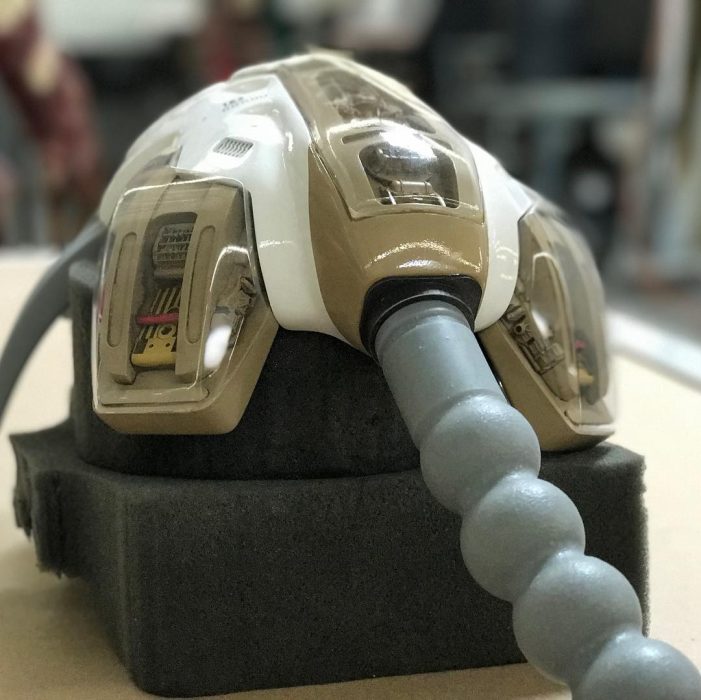 According to the captions from both Jon and Sara, the resemblance to an Alien facehugger was quite deliberate. You can even see a Weyland-Yutani logo on there!

The prop is actually based on designs by Fausto De Martini who previously shared his designs for both this breathing mask and the pod seen at the end of the film. In the concept art, the pod also has Weyland-Yutani markings but they were removed for the finished film (though it still retains the text Pod 03 in English). 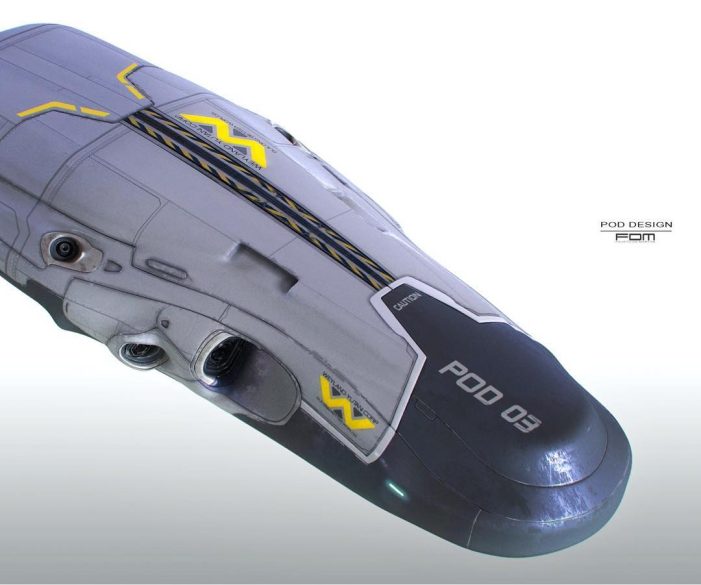 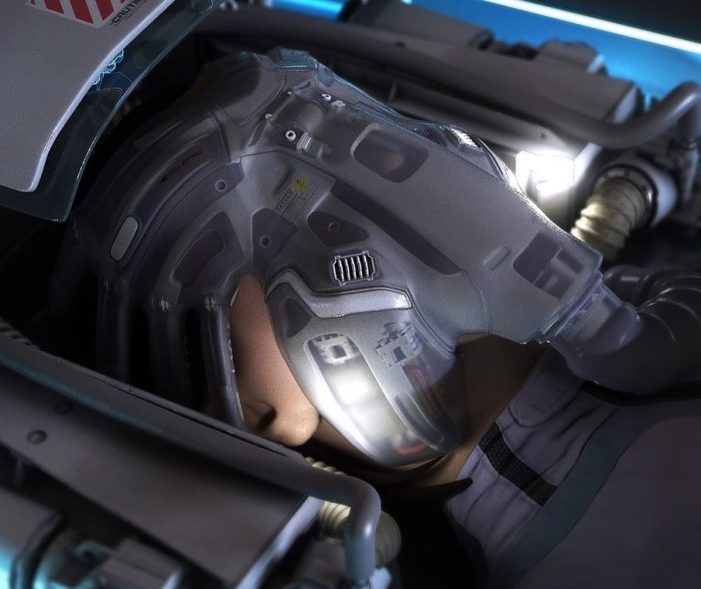 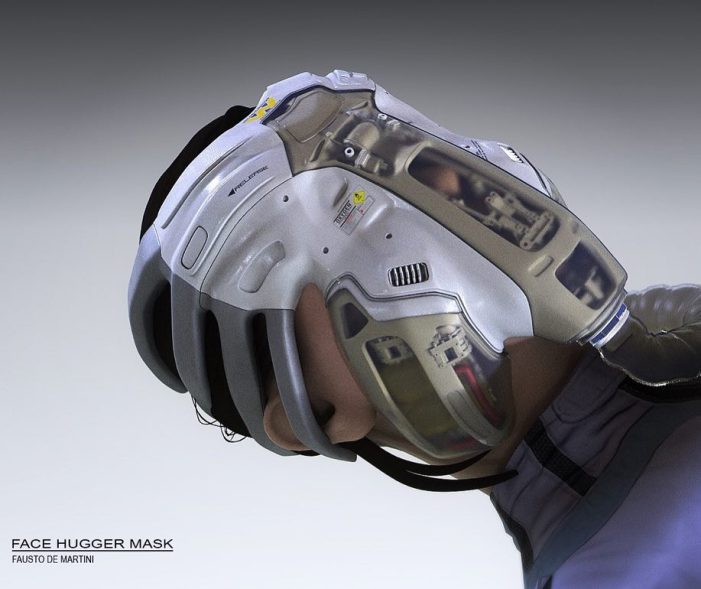 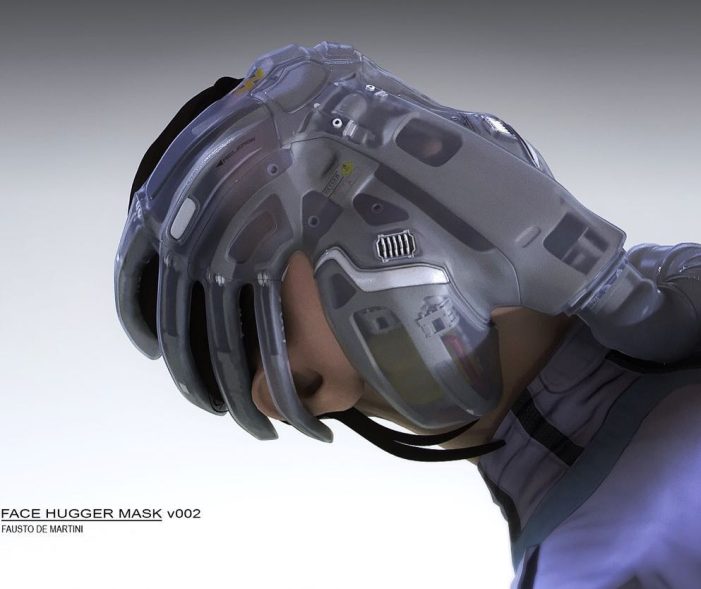 On the comments on Instagram, Fausto revealed that the Weyland-Yutani logo was actually requested from management, nor was this originally supposed to be a Predator pod. It’s unknown if the scene was actually filmed or if it was dropped before filming but the question remains! Who was envisioned to be the occupant of this pod?

Thanks to Christopher Cooksey for bringing this to our attention! Keep checking in with Alien vs. Predator Galaxy for the latest on The Predator! You can follow us on Facebook, Twitter, Instagram and YouTube to get the latest on your social media walls. You can also join in with fellow Alien and Predator fans on our forums!

Update 05/12/2018 – ADI’s Alec Gillis also shared a short clip of the prop with some additional commentary.

There was debate about the end sequence of THE PREDATOR. One idea was to have a cryo chamber with a surprise character revealed in stasis. This person’s face would be concealed by a hi tech life support mask. @tom_woodruffjr suggested that the mask could have the feel of a facehugger as nod to the Alien franchise. ADI was given 7 days to build it from @faustodesign concept work. @jon_k_miller @h2originals @ape5150 @saratheterra Dave Penikas and Zac Teller made it happen! Didn’t make it in the final cut but a fun build! We simultaneously built a different prop for another ending. Pics of that coming soon!