Art of VFX also asked him about the controversial Predator Killer suit from the film’s end. As most of us have already predicted, it was a very last minute addition that was designed by Aaron Sims company and brought to life by Hydraulx (of AvP Requiem).

The final scene was another reshoot, very, very late in the schedule. We had two weeks to get the suit designed. We enlisted the Aaron Sims company and also the Hydraulx Art Dept. The final design was elements from both companies approved by Shane and the studio, then Hydraulx took over the design and began the build. By the time we had the re-shoots, we were less than two weeks out from delivery, so getting the design finale and the build underway was critical.

As the other vendors were going so hard on the other sequences we approached Hydraulx to complete the final sequence. Under the supervision of Colin Strause they managed to pull out the 17 shots needed for that sequence in under 2 weeks. I think it was 9 days from plate turnover to final delivery. It was pretty amazing work. We knew we would have 1 if any, iterations, so it was bit of a hail mary. But Hydraulx managed to pull it off and both the director and studio were very happy with the work. 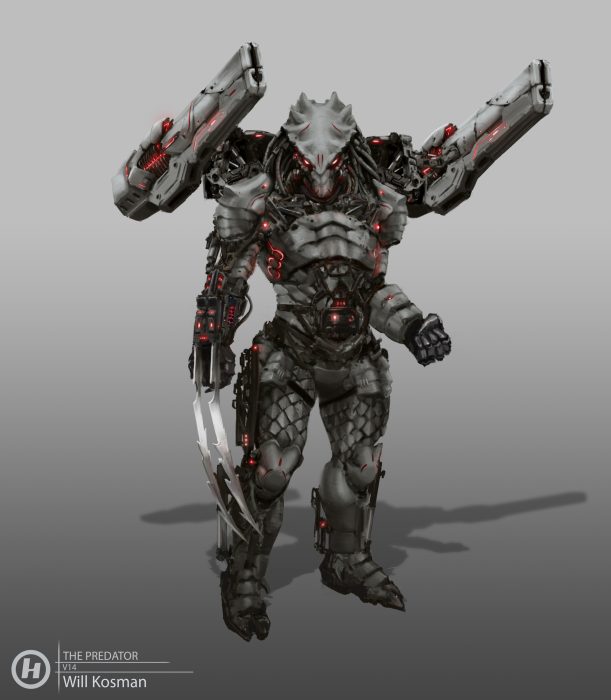 In addition to talking about the approach taken when filming the Upgrade Predator, Sloan also discussed the cloaking effects used in the film. Sloan described the difference between the Fugitive’s and the Upgrade’s as the latter’s being more “intimate“:

We actually kept this pretty simple. For Pred 1 and McKenna’s invisibility, we more or less just updated the original effect. We just made it a little sexier. Like in the last 30 yours their tech has got better. From Motorola flip phone to iPhone sort of feel. The Upgrade has a more intimate effect, with some very designed geometric shapes that spread over his body. MPC and supervisor Richard Little were responsible for all things involving the Upgrade, so they took point on the design and implementation of the cloaking effect.

Sloan also revealed that they didn’t shoot the infa-red sequences using a IR camera, instead it was adjustments made during post-production.

We cheated! We were going to get a Flir Camera, but it needed too much support. In the end we roto’d and color treated the plates to create the iconic “Heat Vision” look. If you look at them strictly from a heat point of view you’ll see they are not consistent. But they look good! Also, at one point the Upgrade uses echo location to pin-point someone behind a tree. This was an entire CG shot where we see what looks like a combination of heat vision and lidar, basically. There were another couple of these shots in the film, but they got cut for pacing reasons. But we kept one! 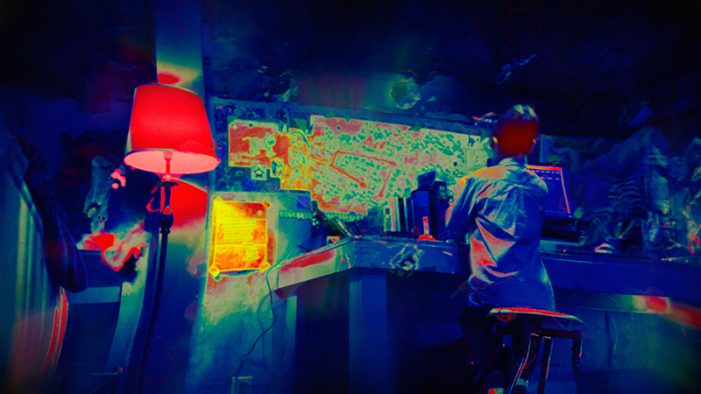 When the effects supervisor was asked about his favourite memories of working on The Predator, he revealed it was reviewing the footage with Shane Black and in finding out just how much gore was too much gore!

When you throw reality out the window and just go for it. The vendors were being reserved, and we were always crying “More blood!”. I ended up using the term “Just take it to 11” a LOT. The over the top gore was something Shane loved. Eventually MPC submitted a shot with an unstoppable geyser of blood pouring from a victim, and Shane said “OK… maybe that’s too much….”. I actually sent an email to all vendors saying that we have finally figured out how much is too much (It was a lot).

Be sure to head on over to Art of VFX to check out the entire interview! Thanks to John Chambers for the tip!