Alien: Isolation’s Amanda Ripley & Aliens: Defiance’s Zula Hendricks are returning for a new comic series titled Aliens: Resistance! Billed as a sequel to both Isolation and Defiance, Brian Wood is returning for scripting duties with artwork by Robert Carey, colours by the returning Dan Jackson and covers by Roberto De La Torre. The legendary Tristan Jones’ is also returning to provide variant cover-art.

SyFy Wire, who made the exclusive announcement, also spoke to Brian Wood about what we could expect from the new series!

“Zula’s story has places it could go and I always wanted to see it continue, even if it wasn’t by my hand. Based on emails and fan art, she connected with people. Resistance also kicks off on Earth, something not really shown in past Aliens works. It’s about the rush of deep space colonization and how the Colonial Marines evolved in response to new threats and situations. Like Defiance, Resistance features the Marines in a big way, but opens things up with the colonists and the political situation surrounding that – plus Aliens, obviously.” 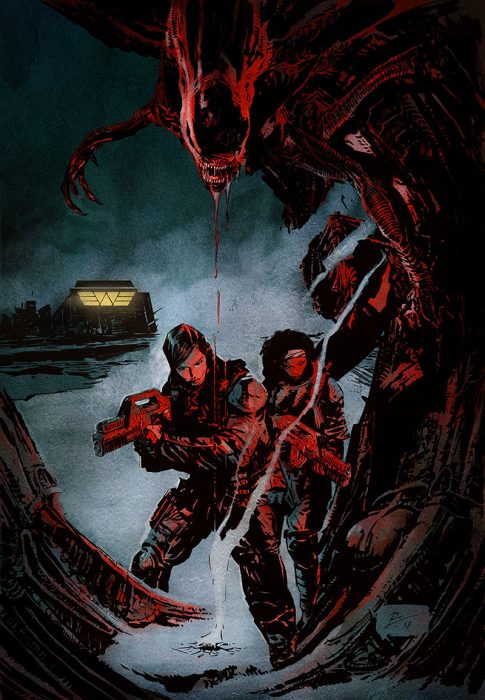 “The Zula we meet in Resistance has found her place – no spoilers – and has moved onto a new phase of her life and with a new purpose – a new mission. Her friendship with Amanda was always more implied than shown, so its been satisfying to properly write that and explore it.  They make a great team.”

“Then it continues with the general narrative of Weyland-Yutani’s earliest efforts to exploit the Alien bio-tech,” shared Wood. “This is fairly early on in the overall timeline of the universe, taking place after Alien and right after the Isolation video game but well before Aliens.”

“I realize Weyland’s been a steady presence in all the films and we all know they’re hot to turn xenomorphs into weapons. I find a lot of interesting dramatic meat in these early, “wild west” years for Weyland-Yutani, when they only sorta knew what they were dealing with, and were running secret black sites to run experiments away from prying eyes.”

Aliens: Resistance is set to be a four issue run with the first issue due for release on the 23rd of January 2019. Also to be released around that time is Titan Books and Keith R.A. DeCandido’s Alien: Isolation novel.