As the countdown to The Predator’s theatrical release runs down, magazine coverage of The Predator continues.

SFX Magazine’s latest issue has a nice spread on The Predator, with some mini-interviews with Steve Johnson, the man who designed the infamous Van Damme version of the Predator, Jackie Burch, the original Predator’s casting director and Dark Horse Comic’s Chris Warner who wrote the current Predator run, Predator: Hunters 2! 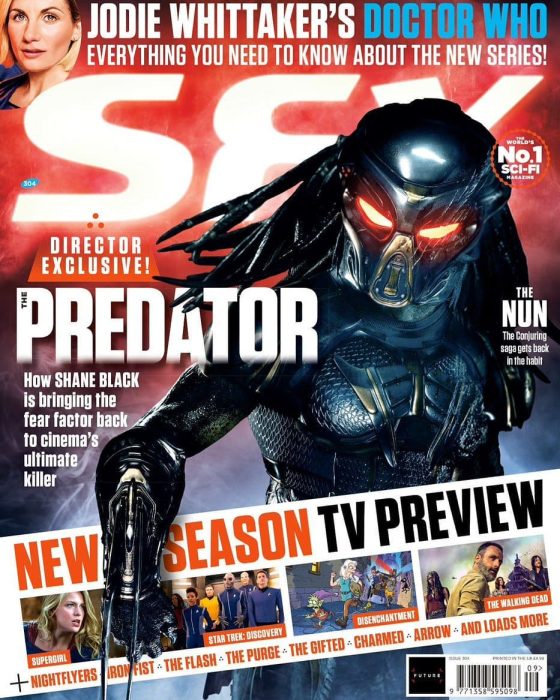 The Predator content is mainly a lengthy interview with director and co-writer Shane Black who talks about how before writing the new film, he and co-writer Fred Dekker dissected the original Predator to determine what elements they wanted to take forward into the new film.

Black also talks about how he wanted to handle filming the Predator itself now that the creature design is so well known. There’s not much in the way of new information but it’s still an enjoyable read. You can read the entire article yourself in our gallery.

As well as the written coverage, SFX also had a couple of new stills including some of the cast and the Fugitive Predator’s escape from the Stargazer base.

[Images removed due to copyright reasons]

In addition to SFX’s article, Starburst magazine also has a pretty good spread covering The Predator (though no new stills or information), the Alien vs. Predator series, Predator comics and some pretty awesome Predator artwork by Mark Reihill for their subscribers!

The latest issue of STARBURST Magazine is in stores now. With everything you need to know about THE PREDATOR, VENOM, and much more. You can also by directly from our website with free UK postage. Save money by subscribing! https://t.co/Bt0WloA4i5 pic.twitter.com/hgDIllQWaQ