Hot on the heels of the new production stills, we now have the full scans from August 2018’s issue of Empire Magazine! The article starts off with a set visit Empire did with the cast and includes quotes from “The Loonies” group as they were filming one particular scene.

The next section covers the original Predator and how Shane Black came aboard that movie and what it was like working with Arnold Schwarzenegger and Jesse Ventura. The article then moves onto an interview with Jacob Tremblay who plays little Rory and what he thought of the Predators. 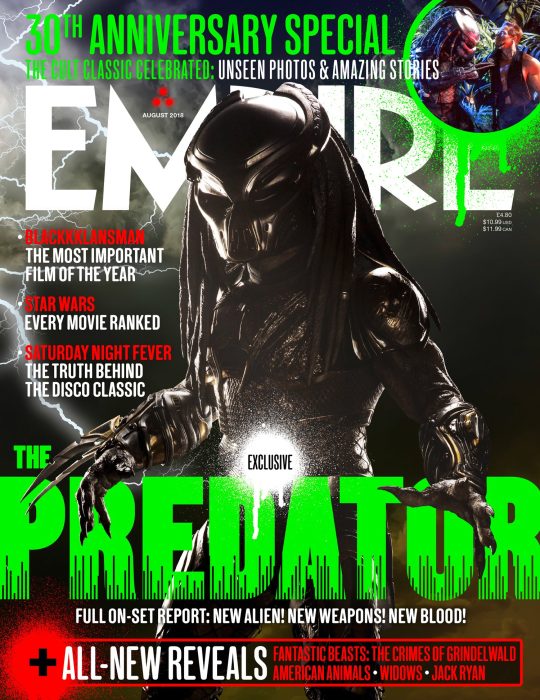 Black says that he wanted to make the Predators scary and mysterious again. Enter the Upgrade Predator – “Bigger, meaner and nasty as hell. Ten feet tall and midnight black, bristling with spines, skin thickened with chitinous organic armour – the product of harvesting DNA From the deadliest creatures on every world it’s hunted. The ultimate expression of Predator dominance. It is, it’s fair to say, one giant, ugly motherfucker.”

Lastly, Empire catches up with Shane Black in June 2018 and the edit of The Predator is almost done aside from a few visual effects. Black states that it’s been a long arduous process, making The Predator – what with the reshoots and everything.

The director does actually say they reshot the last act changing it from daytime to night to make it more scarier. Obviously, the full extent of the reshoots you can read about in our article that we posted last week. The new issue of Empire Magazine comes out on Thursday. Thanks to Gazz for posting the scans.

Update 15/07/2018 – We’ve snipped out and got decent quality versions of the new The Predator stills featured in this issue of Empire, and 2 shots from the original Predator that aren’t often seen: