Collider have recently uploaded their full interview with Thomas Jane, the man behind Baxley, that took place during the set visits from April 2017. We’ve seen snippets of what Jane talked about in the various set reports but now we’ve got the whole thing.

Jane revealed that he signed on to The Predator without ever reading the script. Instead, it was his desire to work with Shane Black that fuelled his involvement in the film. Jane also went on to talk about working with Black, saying that:

I’m attracted to great writers. I think every actor is. It’s all about the writer, so if you have great stuff to say and great characters and all that then you can shine and Shane is one of those guys. He creates a tone that is very hard to do. It’s serious, the stakes are high, the people are real and yet it’s funny as fuck. That’s a hard tone and when Shane hits that tone there’s nothing like it. 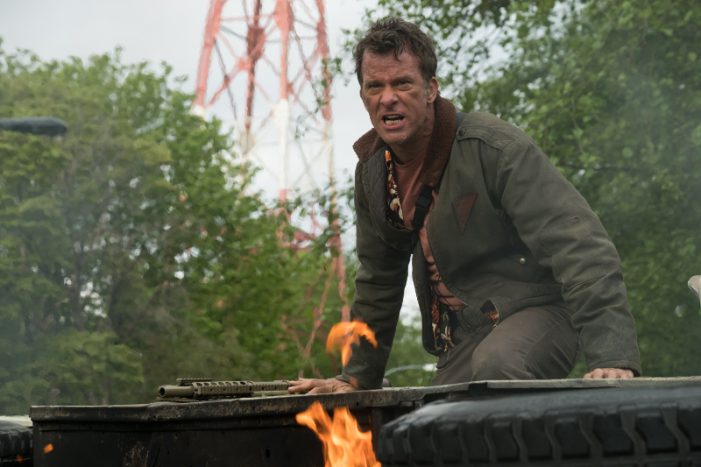 Slightly off topic of the Predator but still relevant to us at Alien vs. Predator Galaxy, Jane also talks about the first time he ever saw Alien!

My parents took me, because we didn’t have money for a babysitter, to see Alienwhen I was 8. My dad was like “Bring him along. What the fuck, it’s a movie.” He’d get me in for free. “He’s retarded, he doesn’t need a ticket. He won’t understand anything anyway.” “He’s adopted, he’s from Germany and doesn’t speak any English. Don’t charge him.”

So, I’d sit there when I was 8 years old, man. I had no idea. We went on opening day. I remember standing in line… we went to the second show. The first show got out and we’re standing in line and all we knew was this green egg that said “Alien.” Is it a comedy? We had no fuckin’ clue what this movie was. And these people were walking out and they just looked kind of pale. You know when you’re 8 you see things that adults just don’t see. I’m looking at these people and they look weird, eyes glazed over and looking pale walking out kind of quiet. I’m like “What the fuck is this, man?”

Then we sit down and the music starts… Oh, and we’re in downtown Washington, DC in a wrap-around Cinerama Dome style and then one bar shows up way over there and then another one… I’ll never forget that. When the chestburster came out my mom had a big Coke and she threw it on the person behind her and that person didn’t get up and leave! I’ll never forget that. True story, true story.

We finally saw a little of Jane and Baxley in the recent trailer! He doesn’t go into too much detail around the specifics of The Predator but it’s a really interesting read. Head on over to Collider and check it out!