Alien title sequence designer and Predator special effects artist Richard Alan Greenberg has sadly died at age 71. The Hollywood Reporter have announced (via Xenomorphing) that Greenberg passed away on the 16th of June in New York following issues with appendicitis.

Richard Alan Greenberg has a very involved history with both the Alien and Predator franchises. Along with his brother Robert, the two designed the iconic title sequence for Alien.

Back in 2013 Art of the Title had the opportunity to chat to Richard about his work on Alien.

The titles came from the idea of something “unsettling.” It’s disturbing to people to see those little bits of type coming on. I think Steve Frankfurt once said to me that sound is 50% of a film and I agree with that. So we abstracted the idea of the off-putting sound but in a typographic way. We wanted to set up tension and as these little bits come in, they seem very mechanical. We wanted to break the type apart using that letter-spaced sans serif, which really hadn’t been done in film before. When the bits finally resolve into a word, I think people weren’t prepared to read it as a title because of the spacing.

Alongside his brother, Stan Winston and Joel Hynek, Richard Greenberg was also a part of the special effects team on Predator that received Oscar and Saturn Award nominations. 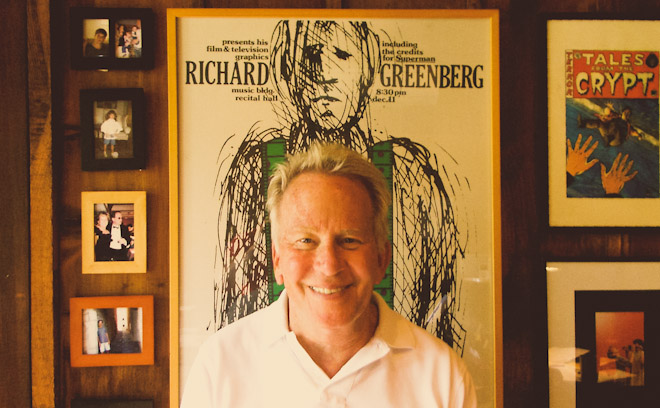 In addition to Alien, Richard has plenty of other title design credits to his name including Flash Gordon and Star Trek: Nemesis.

The thoughts of the Aliens vs. Predator Galaxy staff and community go out to Richard Greenberg’s family and friends. Rest in peace, Richard.