The upcoming trailer – which was recently screened for attendees at Cinemacon – will be 1 minute and 36 seconds in length and is rated suitable for everyone above the age of 12. It’s currently unknown if this will be the exact same trailer that was shown at Cinemacon but it’s a safe bet and thanks to those reports we have an idea of what to expect:

“The trailer starts off on Halloween with Jacob Tremblay’s character Rory playing with a toy box that has a toy alien ship inside of it. It’s revealed that he’s actually controlling a real alien spaceship somewhere else and that ship crashes onto Earth, releasing a lot of Predators into the wild.

The trailer then cuts to an interrogation room with Boyd Holbrook’s character, Quinn who is an expert sniper and the father of Rory. The sequence is intercut with shots of soldiers battling the Predators in a jungle – lots of gunfire and explosions and one of Predators holds one of the soliders up by the neck. Olivia Munn makes an appearance as scientist Casey Bracket and she states that the Predators are upgrading on every planet they visit. She is later seen handling a weapon.” 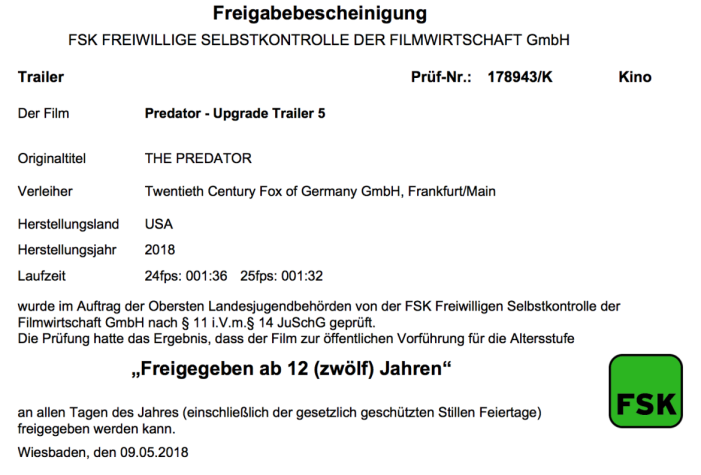 While we have no confirmed release date for the trailer yet, the official Indonesian 20th Century Fox Twitter account recently confirmed that the trailer would be going online in May. Given the usual delay between trailer classification and actual release, we expect to see it released sometime later this week. Trailer Track notes that it’s possible the trailer will be released very shortly (as in today).

The last time we had this wait on Alien vs. Predator Galaxy was the first Alien: Covenant trailer. It too was first classified on a Wednesday and was released on the following Monday. It also looks like the film will be known as Predator – Upgrade for its German release.

Thanks to Hollywood for the heads-up! Keep checking in with Alien vs. Predator Galaxy for the latest on The Predator! You can follow us on Facebook, Twitter and Instagram to get the latest on your social media walls. You can also join in with fellow Predator fans on our forums!

Update: According to popular Alien and Predator YouTuber, The Predator will be screened in front of Deadpool 2 as many of us have been speculating: