We’re still in that unfortunate period of drought when it comes to news regarding The Predator. Shane Black and Harry B. Miller are busy working on editing the film and the special effects companies are working hard. The actors have moved on and working on other projects now.

One such actor, Trevante Rhodes (who plays Nebraska Williams), is currently on the press circuit for his soon to be released film 12 Strong and while talking to Collider (at around 2:38) he spoke a little about what it was like working with Shane Black and the rating.

As expected he’s not able to say too much but his enthusiasm as is so obvious. “[It was] Amazing. I’ll do anything for Shane. I can’t wait for people to see that movie.” Rhodes also spoke about what it was like working with Shane Black and the freedom he was given on set:

“My experience with Shane – which I think is a bit unique than other experiences – but my experience with Shane was we had the freedom to play. And whenever you’re working with someone who is of that mind your mind becomes of that mind so I was thinking like him, basically, whenever we were doing stuff. He just put the camera on you and let you have fun. So being in a space with Shane was insane. It was amazing for so many reasons. I cannot wait to see it and I can’t wait for people to see it.” 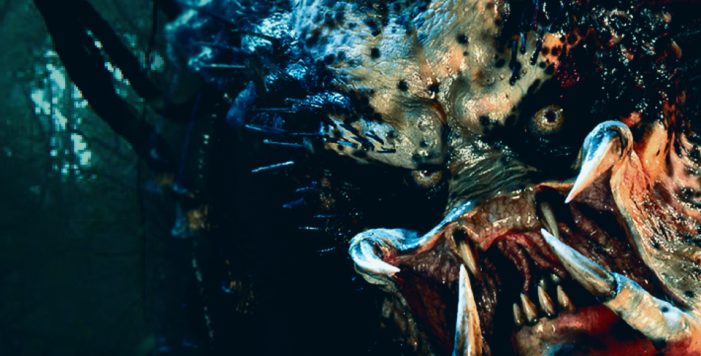 When asked about if the film would “hard-R” Rhodes re-affirmed that it would be. Shane Black previously tweeted about the rating stating that “just to be clear… PG-13 is for pussies. Spines bleed… a lot.”

Based on another Tweet from Shane Black, the trailer is expected to drop within the next couple of months. Theatrically, it’s possible it maybe released alongside 20th Century Fox’s Red Sparrow in early March but that is just conjecture at this point.

Thanks to Darkoo for the tip. Keep checking in with Alien vs. Predator Galaxy for the latest on The Predator! You can follow us on Facebook, Twitter and Instagram to get the latest on your social media walls. You can also join in with fellow Predator fans on our forums!