Last year it became apparent that work on Alien 5 had stopped and Neill Blomkamp told The Verge that he believed Alien 5 was “totally dead.” Following the recently renewed interest in Alien 5, after Neill shared some old concept art, the writer/director has re-affirmed that the film is still not to be.

Responding to a fan query on Twitter, Blomkamp replied that he has “moved on” from Alien 5 but that it was an “amazing chance to work in the world Ridley and James Cameron created. And collaborate with Sigourney.” 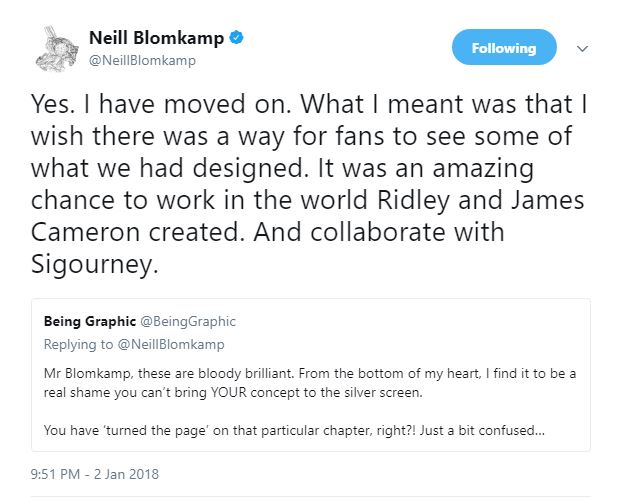 Given the renewed talk of the possible Alien 5, perhaps Disney will take notice of the apparent general interest in the project and want to move forward with it where Fox did not? If so, would Neill be willing to return?

Since the apparent cancellation of Alien 5, Blomkamp has been working on an adaptation of The Gone World. He has also since founded Oats Studios and put out some fantastic short films via the studio. Alien’s very own Sigourney Weaver starred in the debut short. If you haven’t already, go check them out!