In a new interview on Shadow Nation with Shaun Burris and Nathan Schoonover, The Predator’s Thomas Jane spoke a little about his time working on The Predator. The juiciest piece of information comes in the form of some backstory about his character and some early setup for the film. Beware spoilers:

“We play these veterans from like Afghanistan, Iraq war or whatever. But we’re all fucking crazy so we go to the VA hospital to get our meds. We’re all like shellshocked, PTSD… soldiers. We’re at the VA hospital and we’re in group therapy and of course, somebody flips out…this is backstory, I don’t think we really see this…somebody flips out and we all get arrested and get thrown onto the bus to go down to the hospital and they throw this other guy on the bus too.

And he’s a guy they’ve actually marked to kill him because he’s seen a UFO, he’s seen the Predator ships come down so they lock him up and throw him in with us lunatics. They’re going to take that bus, drive it down to a ditch and shoot us all just to get rid of this one guy. But, of course, we take the bus over and we’re all like “fuck that man, let’s go kill these fucking Predators ourselves” and we’re just crazy enough to believe that this guy really did see a UFO and there’s these aliens out there. So that’s kinda cool!”

Jane starts to talk The Predator at around the 45 minute mark. We don’t know which exact character Jane is playing but we know he’s one of the group of characters collectively referred to in the script as The Loonies. The character Jane refers to being thrown on the bus with the others is none other than Boyd Holbrook’s McKenna. 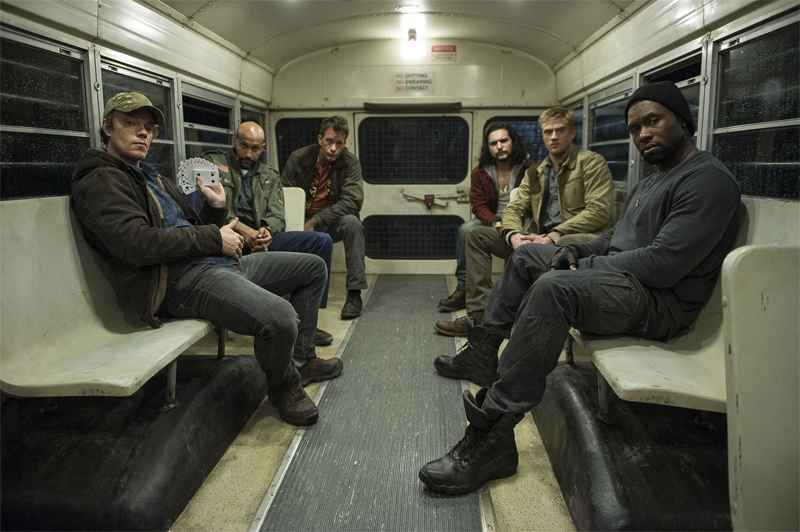 Thomas Jane on the set of The Predator with fellow cast members.

Jane also talked a little about the overall experience of working on The Predator and his impression of the film:

“I can just say I had a blast. We had a great cast, with this terrific ensemble with all these great actors. And Shane Black, he wrote and directed it so it has that kind of Shane Black humor. We had a blast. It was funny. You know the Predators, they looked…you know they didn’t fuck those up. They’re still Predators and they’re pretty much the same Predator as always. I think it might be great. I tell you the acting is going to be pretty good…I’m going to be good in it!”

We’re still some months off the promotion machine kicking in for The Predator. Shane Black was recently asked about when we could expect a trailer. The director and writer told his Twitter followers that it wouldn’t be coming until January time.