Today sees the release of Titan Book’s new novel, Alien: Covenant – Origins, from Alan Dean Foster. They’ve also got the anthology Predator: If It Bleeds due out next month and Alien: The Cold Forge next April.

If you thought Titan was done with Alien after that, we’re pleased to dispel you of that notion. Alien vs. Predator Galaxy is proud to help Titan Books announce another new book, Alien: The Blueprints!

“Titan Books are delighted to announce the publication of a brand new Alien art book in September 2018 as part of their on-going Alien franchise publishing programme, across fiction and non-fiction titles. Alien: The Blueprints by Graham Langridge is a collection of brand new blueprints of all the major vehicles, ships and weaponry of the Alien movie universe.

Artist Graham Langridge delves deep into the concept art, set designs and photography to recreate full and accurate blueprints of the drop ship, the Sulaco, the Nostromo and many more. Covering all the movies including Prometheus and Alien: Covenant.

Presented in a beautiful, hardcover art book, Alien: The Blueprints includes feature gatefold pages to allow the reader to explore larger vessels such as the Sulaco and the Covenant in stunning detail. A must have for any Alien fan.” 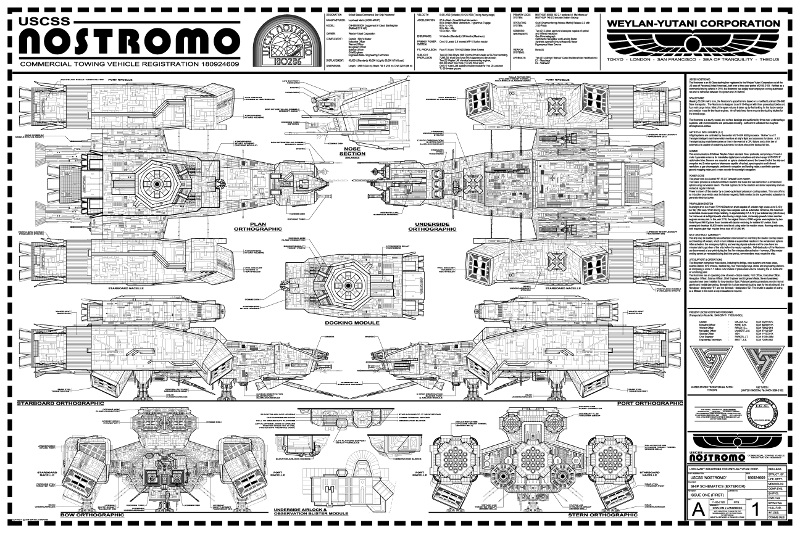 Some of you may recognize the name Graham Langridge. He’s been involved in Alien fandom for sometime and is responsible for the renowned Nostromo blueprint that has circulated around the internet for a while now. It was even included as pullout in the previously released Alien: Vault.

Alien: The Blueprints is currently scheduled for release on the 5th of September 2018 in both the United Kingdom and North America.