In two weeks time Prop Store – London are running another Live Auction. And this next auction has a nice chunk of Alien and Predator props up for grabs!

There’s some more obscure items in the way of Janek’s concertina from Prometheus, various appendages from Aliens and Brian Johnson’s personal copy of Alien’s script. But there’s some truly badass props in here! Up for auction is an original Aliens Alien costume!

“The costume consists of a black nylon bodysuit, with attached hard polyfoam parts moulded in the creature’s iconic bio-mechanical shape, with foam boots, foam tail and slip-latex gloves. Completing the costume is a highly detailed replica headpiece, made from polyfoam with a soft foam interior; a slip latex-rubber replica chest panel; and back panel with the creature’s distinctive ‘exhaust’ pipes. The components are held together with a combination of zippers, Velcro, metal pop fasteners, elastic and simple stitching.

The entire costume has a white, flaky residue, likely from the liquid applied during filming to give the creature its slimy look. It exhibits some cracks and small missing segments, the surface has become slightly tacky in places and it is missing the left elbow pipe, but otherwise remains in good condition. The costume is mounted on a custom-made display. “ 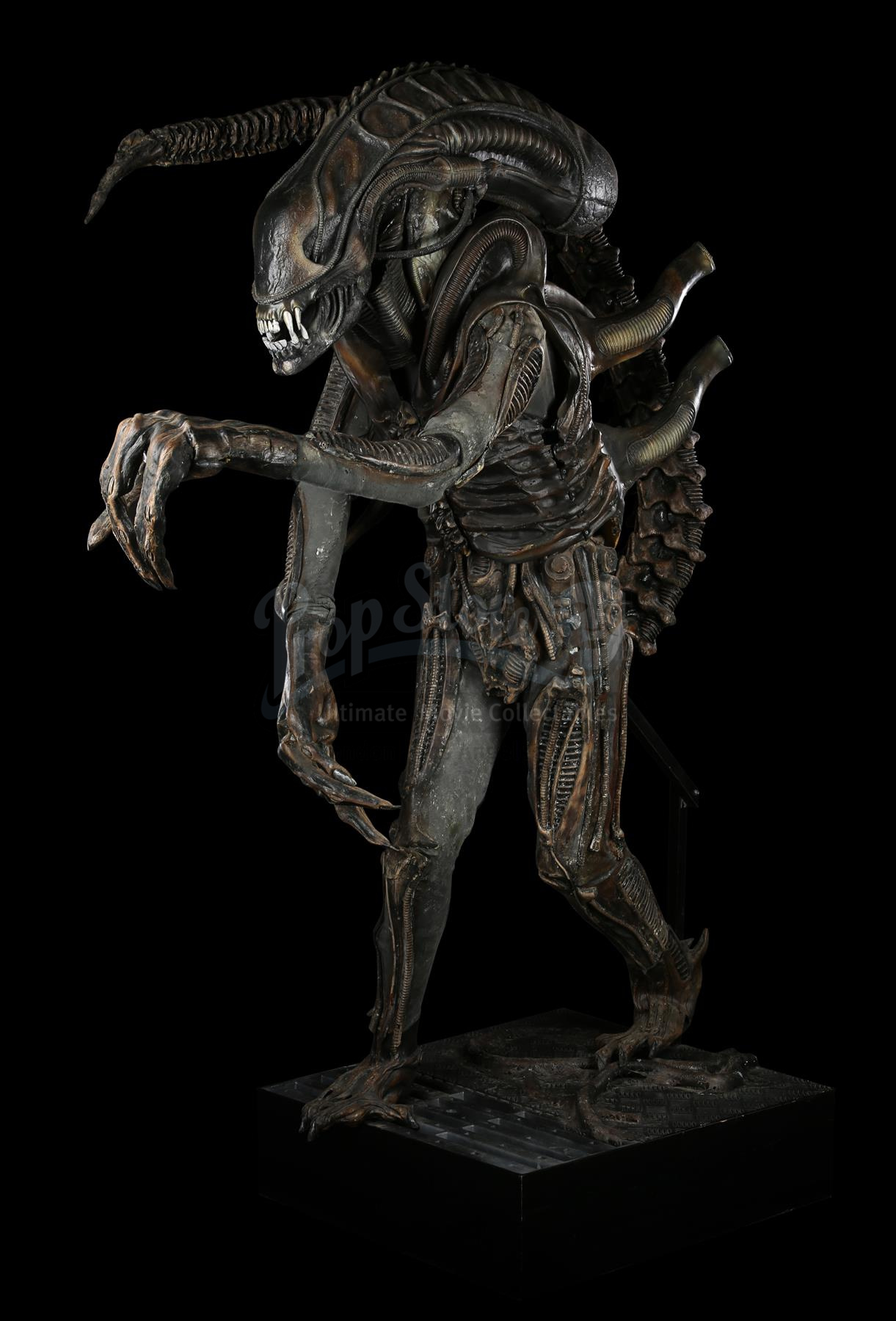 Showing the love to more than just Stan Winston’s studios, we also have the Grid Alien head created by Amalgamated Dynamics, Inc. for Alien vs. Predator!

“The mask is made of foam latex with vacuform plastic on the top of the elongated skull. The head shows a cross-hatch pattern applied to create the creature’s ‘grid’ scarring, with additional green blood painted in the recesses. The base of the neck shows impressions from snap buttons which would have attached to the body of the costume, however the buttons have since been removed. The foam latex shows some signs of aging, including brittle sections around the mouth and neck, with breaks in the plastic at the skull. The mask remains in otherwise good condition.” 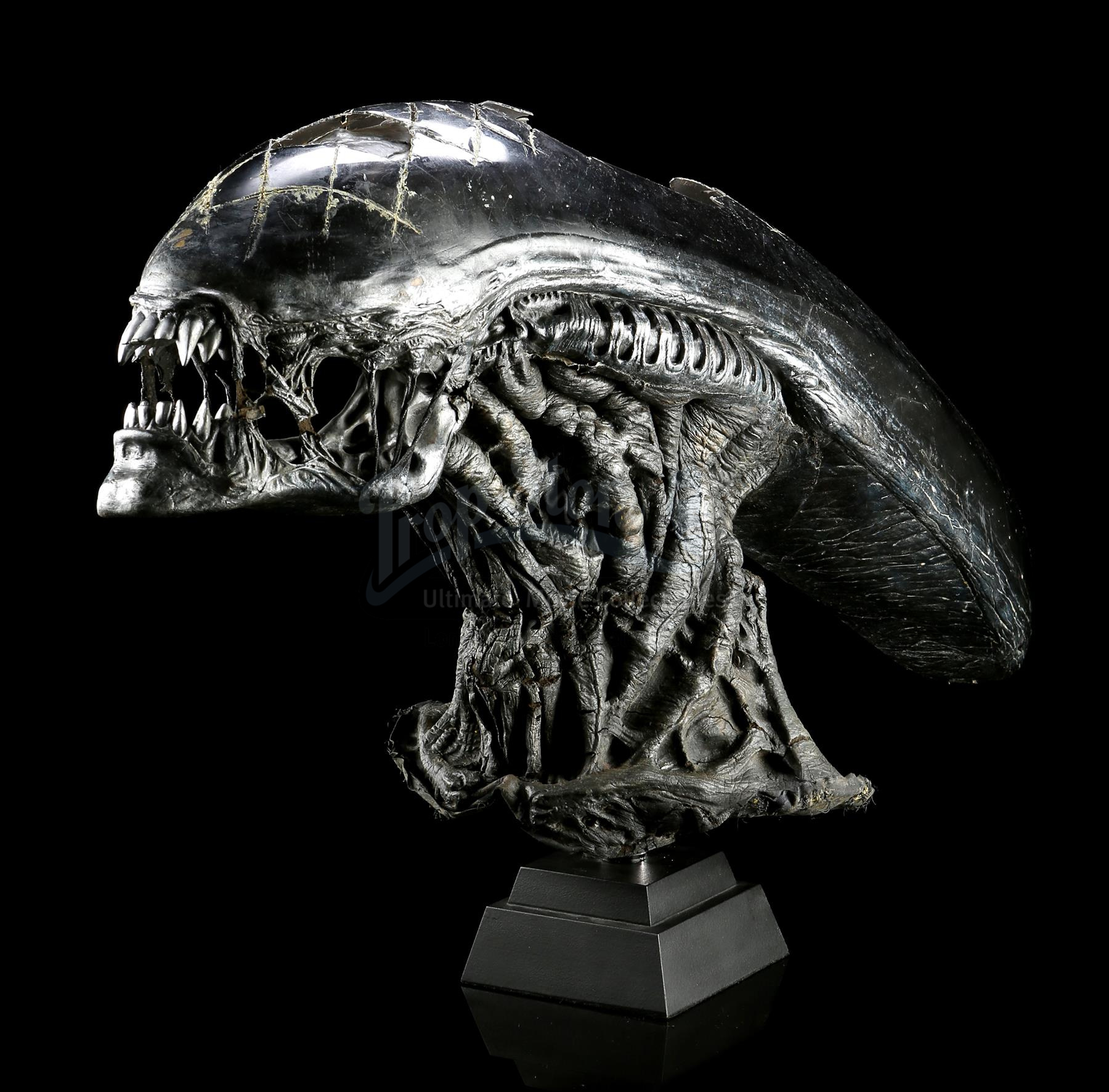 And Predator gets some love in the way of a special effects puppet of the Predator Hound and the Berserker Predator costume from Predators!

“The costume consists of a body suit of foam latex painted in a speckled pattern of black, red, white and yellow; matching hands, which are tipped with resin claws, and feet; a foam-latex headdress featuring an array of foam dreadlocks; and a helmet constructed from hard rubber, with an internal fibreglass layer, internal padding, clear lenses, and decorations which resemble metal and bone, secured via Velcro to the scalp.

Also decorating the suit are hard rubber chest, thigh and shoulder armour pieces, secured with leather straps and several leather cloths; left and right bracers, each featuring a resin blade; a neoprene and rubber collar; a slip-latex loincloth hiding a zipper; and a resin shoulder cannon, the creature’s signature weapon.

The comprehensive costume is presented on a mannequin display in a customised pose, with a base that is themed to mimic the forest in the film. It remains in good condition, with some minor wear from age and use on set, while the helmet has some sticky residue from filming.” 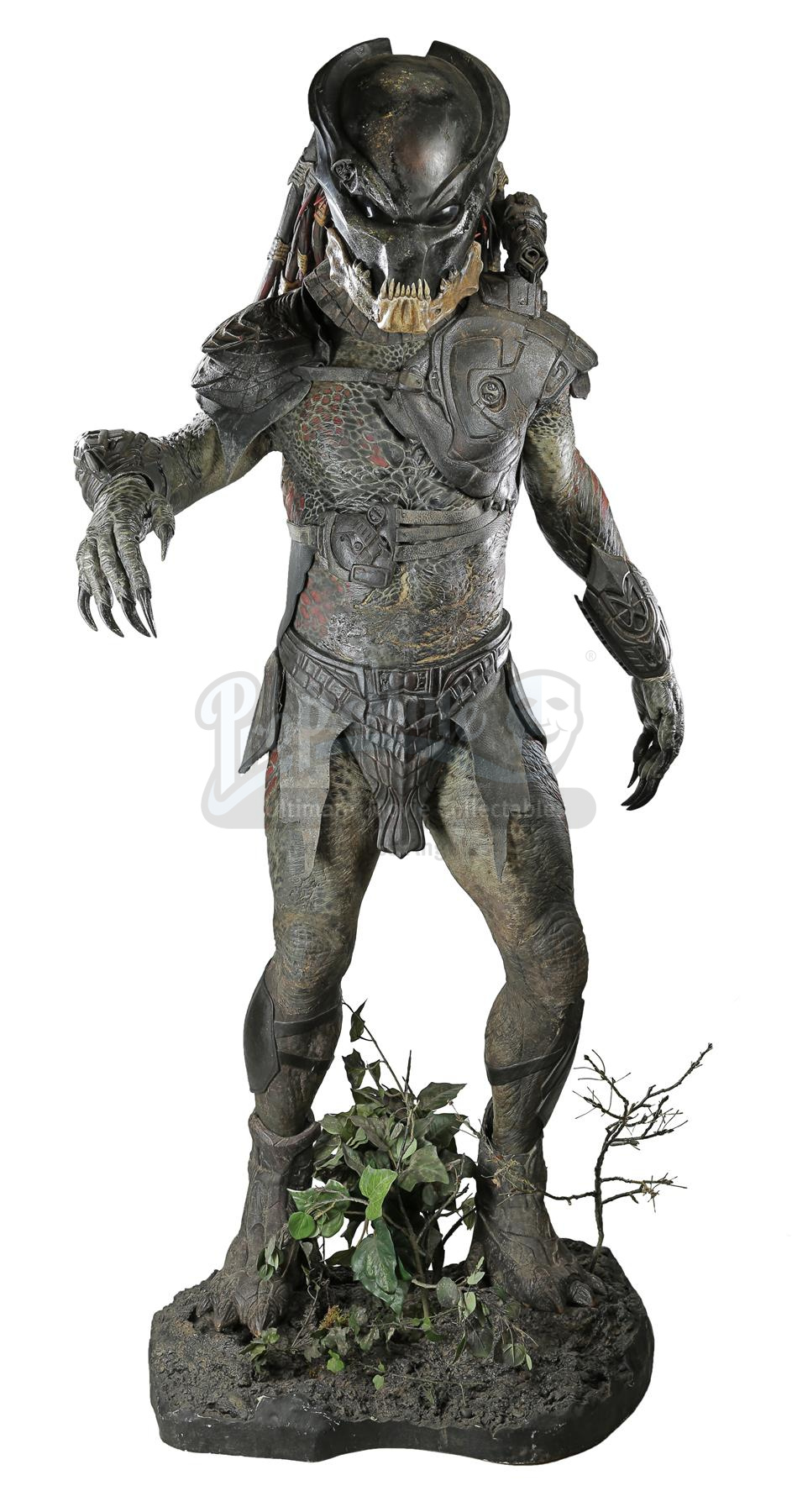 The auction starts at 12:00pm (BST) on the 29th of September. You can find out more about the Live Auction process over on Prop Store’s FAQ. You can also check out some unwatermarked images of the Alien items up for auction over at The Harry Harris Aliens Collection & Archive Facebook page.