We’ve also known for a while that the legendary Alan Dean Foster would be penning his first original entry for the Alien universe in the way of a prequel novel! Earlier this year Alien vs. Predator Galaxy revealed what the prequel, titled Alien: Covenant – Origins, was going to be about!

In addition to that first synopsis, we now have an updated blurb and the exclusive reveal of the novel’s cover!

“The Covenant mission is the most ambitious endeavor in the history of Weyland-Yutani. A ship bound for Origae-6, carrying two thousand colonists beyond the limits of known space, this is make-or-break investment for the corporation—and for the future of all mankind.

Yet there are those who would die to stop the mission. As the colony ship hovers in Earth orbit, several violent events reveal a deadly conspiracy to sabotage the launch. While Captain Jacob Branson and his wife Daniels complete their preparations, security chief Daniel Lopé recruits the final key member of his team. Together they seek to stop the perpetrators before the ship and its passengers can be destroyed.

An original novel by the acclaimed ALAN DEAN FOSTER, author of the groundbreaking Alien novelization, Origins is the official chronicle of the events that led up to Alien: Covenant. It also reveals the world the colonists left behind.” 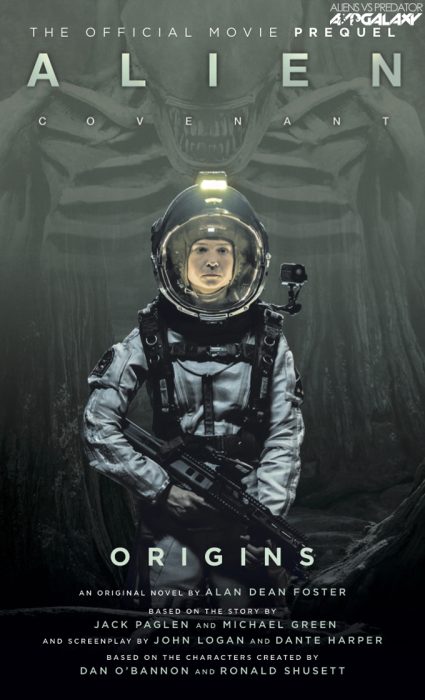 We recently had the pleasure of chatting to Alan Dean Foster on the Alien vs. Predator Galaxy Podcast. Be sure to have a listen to Mr Foster chatting about his experience working on the Alien: Covenant novelization and on Origins!

Alien: Covenant – Origins is currently slated for release on the 26th of September 2017. The book is currently available for pre-order on Amazon and Barnes & Noble.

Keep a close eye on Alien vs. Predator Galaxy for exclusive content and the latest on Alien: Covenant! You can follow us on Facebook, Twitter and Instagram to get the latest on your social media walls. You can also join in with fellow Alien fans on our forums!