20th Century Fox and Alien: Covenant are putting in an appearance over the next few days at San Diego Comic Con. They’ll be there to promote the upcoming Blu-ray release of Alien: Covenant and to help put you in the mood, the official Alien: Covenant Twitter page has just released a preview of one of the Blu-ray’s special features!

Watch a sneak peek of Phobos: An “Alien Covenant” Story and take your own Colonist Certification Test at the #AlienSDCC booth at #SDCC2017. pic.twitter.com/vHOQCclLIB

Phobos is one of two unseen featurettes mentioned in the special features of the Alien: Covenant Blu-ray, with the total runtime of Phobos clocking in at 9 minutes in length. The second featurette is called Advent and I suspect may be the viral piece mentioned in our recent interview with Alien: Covenant illustrators Dane Hallett and Matt Hatton in which we see David working on his artwork.

In addition to the preview, 20th Century Fox is putting Alien fans to the test with the “Colonist Certification Test” at SDCC: “The Alien universe comes to life at San Diego Comic-Con when the ALIEN: COVENANT “Colonist Certification Test” arrives courtesy of Twentieth Century Fox Home Entertainment. Fans will be given the opportunity to test their fortitude and attempt to be selected for Weyland-Yutani’s next colonization mission.*

Those who enter the test will be subjected to rigorous standards like the crew of the Covenant had to endure, specifically testing their ability to handle tense situations. Upon completion of their assessment, guests will receive their own “Colonist Certification Badge” and a set of collectible pins from Weyland-Yutani and the Covenant.” 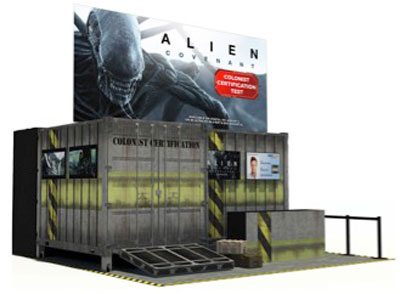 Located at Booth #3529, those who take the test will be able to pre-order the Alien: Covenant Blu-ray and receive a limited edition lithograph. There will also be a photo opportunity to pose with Alien Egg props.