When Alien: Covenant finally hit the screens, the final writing credits were Story by Jack Paglen and Michael Green, Written by John Logan and Dante Harper. We hadn’t even heard of Dante Harper’s involvement until March when 20th Century Fox released the second Alien: Covenant trailer.

The Hollywood Reporter has published an interview with Harper, talking about his involvement with the developing story and specific aspects of the film. Judging from the way Harper talks in the interview, it would appear he actually worked on the film prior to John Logan coming aboard in November 2015. Beware spoilers.

“The scene in which David teaches Walter the flute will undoubtedly go down as one a classic. How did that come about?

I wrote many, many versions of that scene. It’s a really delicate, hard scene to get right. I do think we all owe the actual use of the flute to John Logan or Ridley — it came after me.

I do know that from the get go, it’s such a hard scene to get right, because you’ve got these two identical robots, you’ve got this unhinged narcissist …. But I really think Ridley handled that so beautifully that you have this homoerotic scene that also at the same time turns out to be truly just terrifying and not about the eroticism. I think it manages to be really enthralling and beautiful and so much of it has to do how Fassbender does it, giving it that flute. It’s a scene that easily could have gone wrong. If you imagine a different actor or a poorly written scene, it would just become an obligatory kind of scene, but the way it ends up being written and the way it ends up being played — it’s really one of my favorite parts and I have four or five different parts of that movie.” 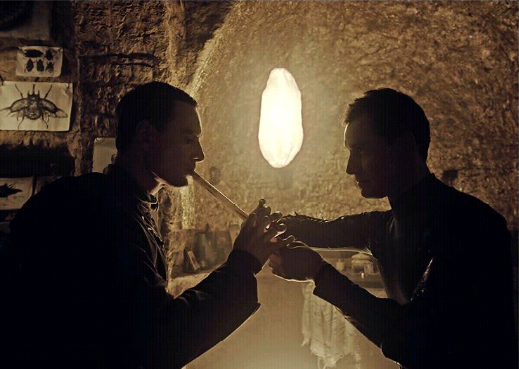 Harper also goes on to talk about one of the more controversial aspects of Alien: Covenant, the discovery of the Alien’s origins at the hands of David and about how The Crossing originally took place at the beginning of some of Dante’s drafts:

“Some fans won’t like that we now know so much about the Xenomorphs’ origins. What is your reaction to that, and how did you decide how much of that backstory to share?

In terms of how much we know, and how much we learn, that in a sense becomes Ridley’s decision. It’s very hard to fabricate new information, but it’s very easy to cut it out. In my drafts of the screenplay — and I’m sure drafts that came along later —even if you’re keeping things shrouded in mystery, I think you actually have to know what happened, because people can tell when they see a tip of an iceberg but there’s no real iceberg underneath it and you really haven’t done the math, you haven’t figured out what happened. I think I could write a small book about all the things that happened, because we had to figure all that out. So the question became how much are we going to learn? One of the things that was interesting about the final cut of the film, is we actually ended up learning a lot less than was possible given the drafts that we had. That was always the question with every draft, “how much can we reveal, how much can we not?” At the end of the day, I think a lot of those decisions got made in the editing room. You can tell the information is there. I think they pulled back in places. If you’ve see teaser No. 2 that has the scene between David and Shaw [Noomi Rapace] — that was a scene that was at the beginning of many drafts of the movie that I wrote, because at the time, we were thinking that this movie would really pick up a few seconds or a few days after Prometheus ended.

That opening became kind of a standalone piece. It gives you a sense of the degree to which there used to be a lot more technical information about what exactly happened. There is the history of the Engineers and their relationship to the xenovirus, and also David’s creation of the alien. Both of those things were always a question of how on the nose to get.”

Head on over to The Hollywood Reporter to read the rest of the interview where Dante also talks about the ending of the film. Thanks to echobbase79 for the news.