Ridley Scott made it clear from the outset that Alien Covenant was to be shot as a Hard R movie. Last week, we had confirmation that, just like every other Alien movie barring Alien vs Predator, Alien Covenant was officially rated R in the US for “sci-fi violence, bloody images, language and some sexuality/nudity. ”

Meanwhile, this week, the British Board of Film Classification has rated Alien Covenant a 15 in the UK uncut with a runtime of 121 mins 55 secs. The 15 rating is for “strong bloody violence, gore, strong language.” The certificate isn’t really a surprise – every recent movie in the franchises have been rated a 15. Here’s a little bit of trivia for you – Alien Resurrection is the only movie in the entire Alien/Predator franchise to have still been given a 18 certificate after re-ratings. 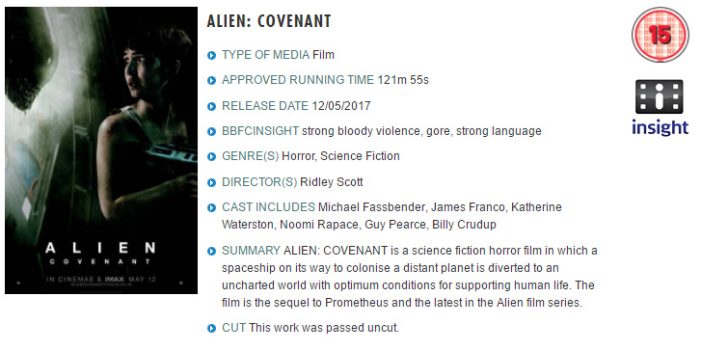 By the looks of the Alien Covenant footage I saw on Alien Day last week, the film will be a lot gorier than its predecessor. I always felt Prometheus had a very tame R Rating compared to the other films in the series so it’s nice to see the horror has been amped up.

Thanks to Wobblyboddle77 and Darren for the news. Keep a close eye on Alien vs. Predator Galaxy for the latest on Alien: Covenant! You can follow us on Facebook, Twitter and Instagram to get the latest on your social media walls. You can also join in with fellow Alien fans on our forums!