20th Century Fox have started a Death Bracket on Facebook where Alien fans can vote on who they think is going to survive the film.

“Who will survive the Alien: Covenant Death Bracket? Stay tuned to see the matchups, and use Facebook Reactions to cast your vote by 9 PM EST / 6 PM PST.” 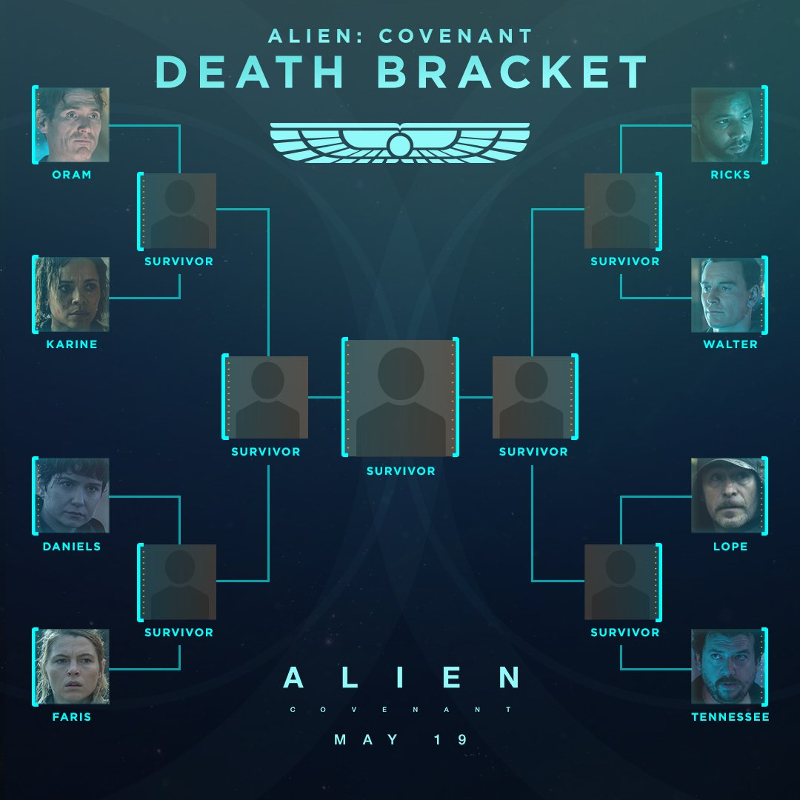 It’s not the most exciting of features but it gives us some new images of the cast of Alien: Covenant and reveals of the name of Carmen Ejogo and Jussie Smollet’s characters – Karine and Ricks. It also clears up the name of Amy Seimetz’s character; It’s Faris, not Saris.

Update #1 – The Alien Anthology Facebook page also shared some character details which you can find below:

“ORAM: As the Covenant’s Executive Officer, he’s second-in-command and ready to step up at a moment’s notice. He’s both a life sciences officer and man of faith.

KARINE: She’s lead biologist for the Covenant, but would have made a great politician. Composed, strategic, and empathetic, Karine is a natural peacemaker.

DANIELS: The mission’s Chief Terraformist, Daniels is a tough and brilliant engineer. While an unassuming realist, her courage and resourcefulness may prove necessary.

FARIS: Covenant co-pilot and ship’s medical support, Faris is a no-frills, no-nonsense type of person with a sharp, irreverent wit. She has no patience for social graces.

RICKS: A military-trained navigator and one half of the Covenant’s navigation team, he’s a former analyst for Weyland-Yutani’s planet scouting initiative.

WALTER: Walter’s been designed to function without creativity and willfulness. He’s programmed with a deep loyalty to the crew members and colonists he serves.

LOPE: Head of the Covenant’s security team, Lope is the most experienced soldier on the ship, having served over a decade for the Colonial Marines.

TENNESSEE: Tennessee is a pilot and member of the Covenant’s bridge crew. Wry, rural, and solid as a rock, he’s a loyal friend, a devoted husband, and a big fan of whiskey.”