We previously reported that Sir Ridley Scott, Michael Fassbender and Danny McBride would be attending SXSW to show off footage of Alien: Covenant alongside a screening of the original Alien.

Yesterday was the day and they showed three clips of Covenant, including the two that were shown to the press at the various Showcase events at the end of 2016/start of 2017. However, SXSW attendees also got to see a new clip that we have only seen snippets of before (beware spoilers):

“One of the crew somehow meets David (from Prometheus) who has been living on the planet for over a decade, experimenting with the black ooze from Prometheus. He tells the person how he’s been testing it with a variety of genetic techniques, in an attempt to create life. He shows the person all his failed attempts and tells him that he thinks he’s figured out how the create the perfect specimen. He just needs one more thing. He leads the person into another room and shows him some eggs. These eggs, of course, contain facehuggers. And one attaches itself to the man’s face.”

The above comes via Beeslo on /r/LV426. If you think that sounds like a scene from the trailer you’re not wrong. Tracking Board clarifies that the crewmember was Billy Crudup’s Oram whose unfortunate encounter we have seen in both trailers. 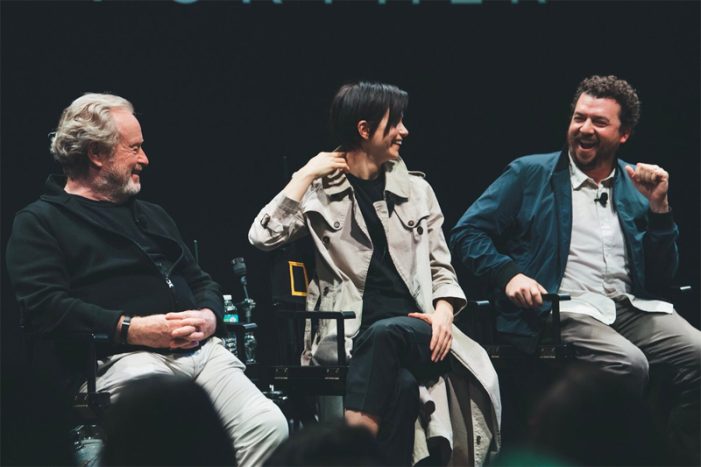 Scott, McBride and Fassbender were also joined by Katherine Waterston and as well as screening the Alien: Covenant preview, they did a Q&A with the audience, attended a Q&A panel hosted by Entertainment Weekly and did a roundtable with some of the press. Several points of interest across the Q&As are:

Judging from the Twitter reactions, the reception to the previews were pretty positive! With just over 2 months until Alien: Covenant’s release, we wont have to wait long to find out!