Back in June members of the press were shown around the sets of Alien: Covenant. We caught hints of that as various journalists shared photos of themselves on the Potts Hill Quarry set but it’s taken until now for the veil of secrecy regarding those visits to be lifted. Countless outlets are now publishing their reports of their time on the set of Alien: Covenant and there’s a lot of juicy information to digest!

ScreenRant have a great character guide, offering our first major look at the large cast and the characters they’re playing. So far all we’ve really heard about has been Daniels, Walter and David. Some of the other outlets have more detailed quotes from the various actors, including this nice account of Billy Crudup’s Oram from Coming Soon’s article: “When I first auditioned for this, the script that I read, he was sort of an antagonist,” Crudup admitted. “And I was like, ‘Well, I’m not so interested in playing him like that.’ I’d rather play him as someone who really thinks he’s doing a great job, and he’s so focused on that that he’s doing a horrible job of socializing and a horrible job of leading, but it’s not because he’s a sh*tty guy and it’s not because he’s nefarious or something.”

Speaking of creature design, Creature Effects Supervisors Conor O’Sullivan and Adam Johansen explained that like Prometheus, Alien: Covenant’s creatures inspiration came from the ocean: “Walking into the breezy and sunlit entryway for Alien: Covenant’s Creatures Department, I step slightly to my right. Below, my foot ever so gently has just avoided tripping over an array of charred, synthetic legs and mangled flesh. Mounted above the blackened limbs is an amber molding of a fledgling Xenomorph, jellyfish-shaped and gelatinous. Clearly, I really have landed onanother planet, one made in Ridley Scott’s unique science fiction image.

Creature Supervisors Conor O’Sullivan and Adam Johansen cite jellyfish and the ocean as general inspirations for their alien designs, yet this creature is also akin in size and vulva evocations to painter Georgia O’Keefe’s flowers. At times the amber hue of the plastic encasing merges into a deeper red like congealed blood. And blood abounds in Ridley Scott’s follow-up to 2012’s Prometheus and prequel to Alien. When asked if this is going to be the goriest Alien film we’ve seen thus far, Neil Corbould, the special visual effects supervisor, smiles cheekily and nods, “Yes, I think so.” 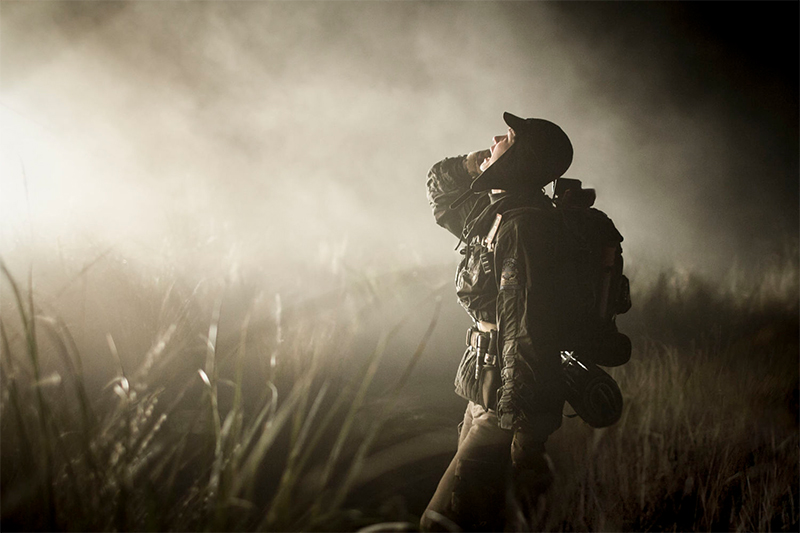 Katherine Waterston as Daniels in a new publicity still from Alien: Covenant.

Talking to CinemaBlend, Demian Bichir (who plays Sergeant Lope, head of the military forces aboard the Covenant) explained the meaning behind the Covenant’s name: “It’s a Noah’s Ark. You’re going out there, we have a lab, and we have many different species of this and that. And this is about moving – and when you move houses, you make sure you bring your blender with you. [laughter] You don’t leave anything behind. You never know what you’ll find or not find in the new place.”

The fate of Prometheus’ surviving protagonist Elizabeth Shaw has been a big mystery. We saw Daniels find her dogtags in the trailers but otherwise Shaw’s role in the film has not really been discussed. Joblo spotted something during their visit that that might interest the fans wondering about what happened to Shaw! “One piece of art that I kept going back to was a Giger-esque drawing of Shaw’s head (Noomi Rapace) surrounded by bio-mechanical tubes, as if she was mutating into something (I thought the first Xenomorph from ALIEN perhaps?). I was surprised they would let such a picture out there for us to see – so keep that in mind, it may be sly misdirection on the Studio’s part.”

Haleigh Foutch of Collider was particularly impressed with the atmosphere of the sets, proclaiming “Holy Shit” as she stepped onto the set for the first time. “The entire soundstage is atmospheric, thick smoke sticking like cobwebs wherever you turn. From the entrance, it’s lit up enough that you can make out the artifices of filmmaking: the planks and platforms holding the set together, the lighting rigs and camera setups, and the bustling crew members, always moving from A to B between takes. But once you step onto the set itself, you are transported. You are in an Alien film. It’s movie magic in real life, and it’s so cool that it takes a minute to remember that is kind of terrifying.”

In addition to the reports, 20th Century Fox has also released two brand new publicity stills! One still shows a shadowy figure in the Engineer hallway that we have previously seen. The second still we posted above, showing Daniels looking to the sky. 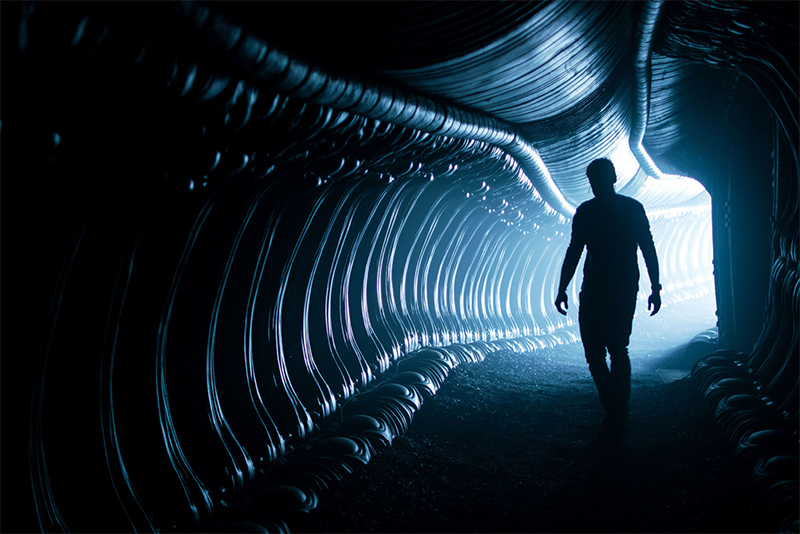 We’ll try to keep this list updated with new reports and interviews as they’re released. If you come across any new ones, please drop us a link down below!

Update 07/03/2017: A third new production still – another of Katherine Waterston as Daniels – was released with some reports. So far only a cropped versions of this still had made it online but thanks to a set report from Film Starts, we have the still in full. 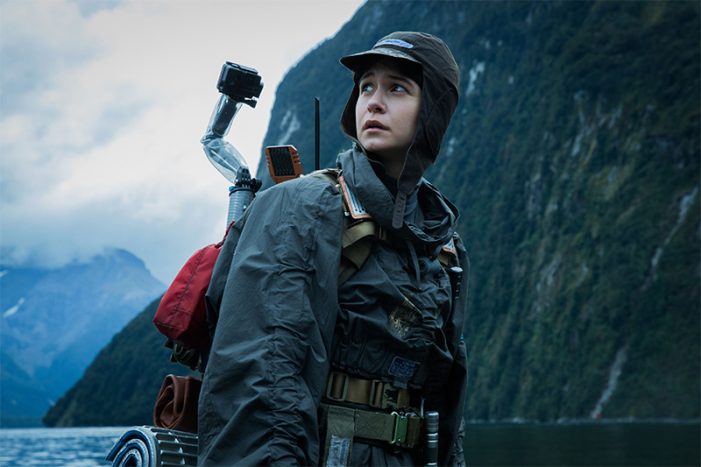