““It was good fun. Ridley’s really good to work with. Quirky but good. With the decades of experience he’s got, he knows what works and doesn’t work. He knows exactly what he wants – and exactly how we can do it. He’s really good at methodology. I’m assuming [that’s] because he’s worked with so many people doing creatures.”

“His reference illustrations are awesome, because he can draw; he has an arts background. A lot of directors can’t; they can tell you what they want but they can’t physically give you the visual information.” 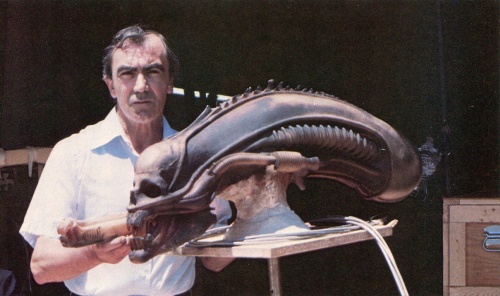 Carlo Rambaldi’s original functioning Alien head. You can read more about this on Strange Shapes.

Talking more specifically about some of the creature design, Trefry told Inside Film that Alien: Covenant’s main Alien was “a hybrid between a suit and an animatronic. There were quite a few suits, and then the headpiece is obviously an animatronic because you can’t operate it by hand.” Paul Trefry also mentioned working on “lots of bodies and little critters.”

Daniels’ actor Katherine Waterston previously talked about working on set with a practical Alien,  saying that “Ridley is a little sadistic. He likes it to feel pretty scary on set. There were days when there were really enormous Aliens chasing me and I was in a cumbersome spacesuit.”

Thanks to Pvt. Himmel for the news. Keep a close eye on Alien vs. Predator Galaxy for the latest on Alien: Covenant! You can follow us on Facebook, Twitter and Instagram to get the latest on your social media walls. You can also join in with fellow Alien fans on our forums!