Those 1/16 scale Alien and Predator figurines from Eaglemoss will soon be available to buy individually from April 2017 in your local comic book shops or news agents. I believe for the past month or so you could subscribe online to get two figures every month delivered to your door but in April, you’ll be able to buy them individually in stores without subscribing to anything.

The first figures to be released will be the Big Chap from Alien and Scar Predator from Alien vs Predator but many more are lined up including the Warrior, Dog Alien and Deacon. Each statue will be priced at USD$28.90 or GBP£17.99 and will come in a nice little display box. You’ll probably be able to find them in your local Forbidden Planet. 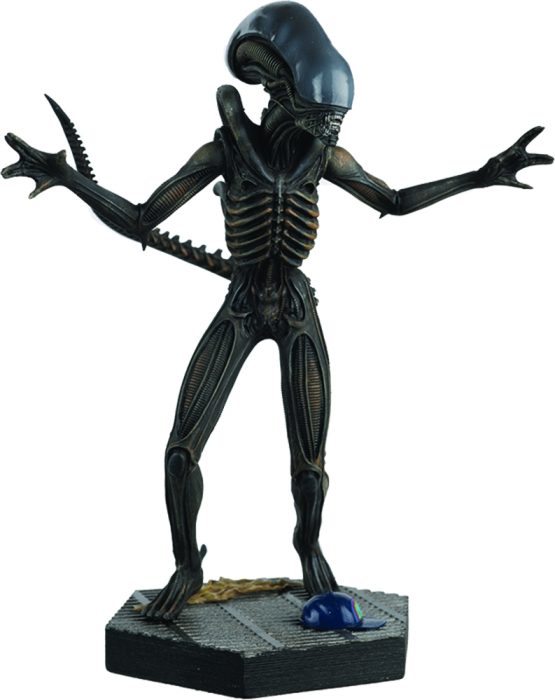 Here’s the press release from Eaglemoss:

(February 6, 2017 – New York, NY) – In celebration of one of science fiction’s most loved and enduring series of films, Eaglemoss Collections has joined with Twentieth Century FOX Consumer Products to answer the demands of generations of sci-fi fans with the introduction of the first and only authorized collection of figurines based on characters from the Alien, Predator, AVP and Prometheus movie franchises.

The first series of collectibles to be launched under Eaglemoss’ new Hero Collector brand, the Alien & Predator Official Figurine Collection presents these classic characters in stunning yet terrifyingly realistic detail at 1:16 scale.

First up in the collection are two of the most iconic fan favorites. With arms outstretched, the imposing Xenomorph from the original Alien stands approximately 5-1/2 inches tall. Then there’s “Scar,” the commanding Predator from Alien vs. Predator. Having speared his Xenomorphic quarry, he’s close to 7-1/2 inches high. Like all figures in this definitive handcrafted collection, each has been cast in a specially formulated metallic resin and painted by hand.

Priced at $29.95, each figurine comes in a four-color display box and will be invading local comic shops beginning in April 2017.