“I’ll tell you there’s a lot of offers that I’ve turned down. I got offered The Predator movie. There’s a new Predator movie coming out and the guys came to me – did you see that horse thing I’ve done, the horse racing? That was like three days solid work for a hell of a lot of money, for three days. During that three day course, the people from Predator who are having this new Predator movie, a blockbuster…They came in and tried to the sell the whole shit. “We want you to be the main guy and you’re gonna fight [the] Predator” and I’m like “this sounds brilliant! How much?”

Not enough. We went back and forth negotiating and the number climbed up but if I was to do it would mean eight weeks in Canada, in Toronto or somewhere. It’s too long a time. You can’t do a million things at once. The Pegasus thing was one thing because it was like three days, in and out. But seven, eight weeks on a film set is heavy as fuck. Plus it would have crept in around when he’s due. I didn’t want to get tricky with that so I turned down that offer.” 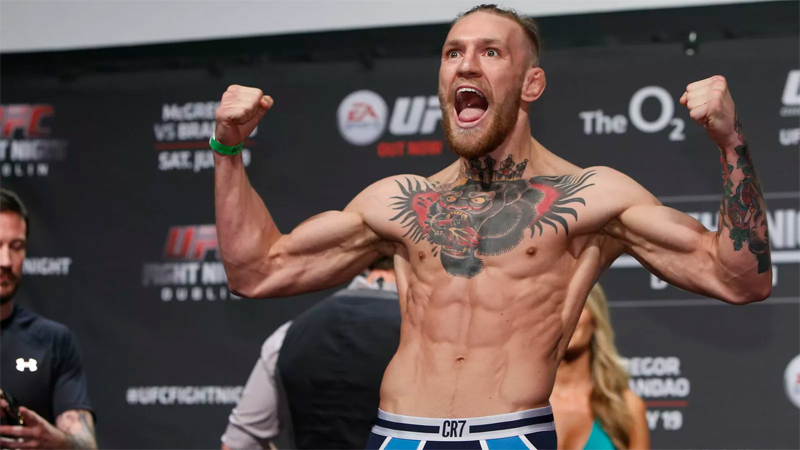 Conor McGregor was offered a role in The Predator he revealed in an interview with An Experience With.

When McGregor says “he’s due” he’s referring to him and his wife expecting a baby boy soon. You can view the whole interview on YouTube. The Predator question comes up around the 48 minute mark. McGregor joins Ben Affleck, Tom Hardy and Christian Bale in turning down offers for The Predator.

McGregor is better known as a professional mixed martial arts (MMA) fighter than an actor, though he did provide voice work for Call of Duty: Infinite Warfare.

This also isn’t the first time someone involved in physical sports has been named in connection with the Predator series over the years – both Dwayne Johnson and John Cena had been repeatedly mentioned in the past when it came to Predator 3. And, of course, we already have Predator’s Carl Weathers (a professional footballer), Jesse Ventura (a professional wrestler) and Predators’ Oleg Taktarov, a fellow UFC champion.

Thanks to Tom Wilson and FreeFaceHugz for the news. Keep checking in with Alien vs. Predator Galaxy for the latest on The Predator! You can follow us on Facebook, Twitter and Instagram to get the latest on your social media walls. You can also join in with fellow Predator fans on our forums!

Update #1 (30/01/2017) – The full length interview has since been removed but there’s still a short clip of the specific question and McGregor’s response about The Predator.

Update #2 (31/01/2017) – Shane Black tweeted last night that McGregor was not offered the lead role but he didn’t provide any extra commentary, just saying that: “CONOR McGREGOR: great guy, nice as can be — NOT, however, offered the male lead. Boyd Holbrook holds that distinction. Just sayin’.”

Related News Posts
Alec Gillis and Tom Woodruff talk The...
Brian Prince Talks Performing As The...
Arnold Schwarzenegger Turned Down The...
Where should Shane Black’s Predator...
Casting Rumor: James Franco to Star in The...