The chances of seeing Neill Blomkamp’s Alien 5 are “slim” according to the would-be director/writer. Back in October of 2015, Neill Blomkamp confirmed to the world via Twitter that his upcoming Aliens sequel was on-hold pending Prometheus 2 (Alien: Covenant).

Since then we’ve had the occasional comment from Sigourney Weaver, Michael Biehn and even James Cameron chipped in, describing Blomkamp’s script as “gangbusters,” but Blomkamp has generally remained silent on the matter. Until now.

Last week a fan took to Twitter to ask Neill Blomkamp himself about the chances of seeing his Alien 5 happen. Blomkamp responded with a succinct “slim“. 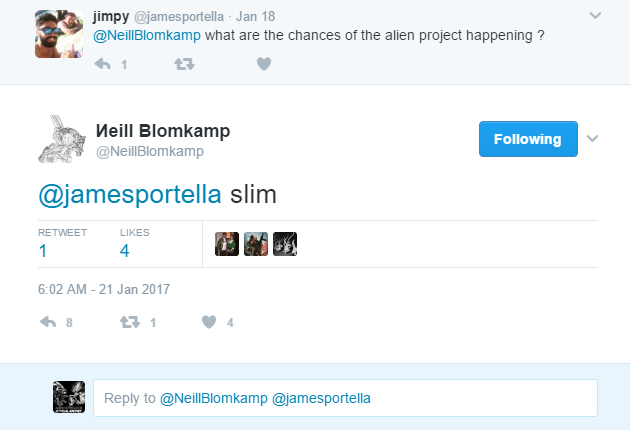 The chances of seeing Neill Blomkamp’s Alien 5 are “slim” according to the would-be director/writer.

When it was announced that Alien 5 (3.2) would be on-hold, Sigourney Weaver and Neill Blomkamp continued with their own projects. Weaver was set to appear in James Cameron’s Avatar sequels and Blomkamp moved onto developing a new film, The Gone World. After that it looked like it’d be a good few years before we finally see Alien 5. Now it sounds like we may not be seeing it at all.

Thanks to Nightmare Asylum for the news. Stick with Alien vs. Predator Galaxy for all the latest news and information on Alien 5! You can follow us on Facebook, Twitter and Instagram to get the latest on your social media walls. You can also join in with fellow Alien fans on our forums!