I would like to preface this by stating that this is an unconfirmed rumor and we’re posting this because The Playlist is a reputable site. According to sources close to The Playlist, Katherine Waterston’s character in Alien: Covenant, Daniels, will be none other than Ellen Ripley’s mother.

“Sources close to film and actress tell us the Waterston will be playing Ellen Ripley’s mother in “Alien: Covenant,” which is an amazing twist and true to Ridley Scott’s promise that the post-“Prometheus” prequels will eventually lead right up to the first “Alien” movie. It should be noted however that Waterston isn’t the lead of the movie, and it’s an ensemble piece like “Prometheus.””

Ridley Scott spoke about Alien: Covenant having a connection to Ripley back in September 2015, leading many to speculate that the connection could be a character who is a relative of Ripley: “It’s more associated with Ripley, it’s a completely different angle, it’s more of a sequel. I’m coming in from the back end.” 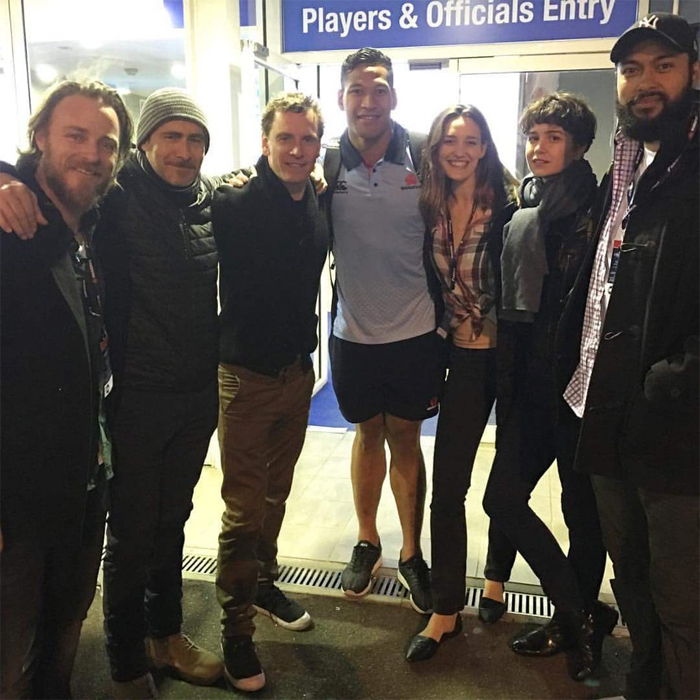 Katherine Waterston and some of her fellow Alien: Covenant cast pose together at a NSW Waratahs game.

In other minor Alien: Covenant news, executive producer Fred Baron spoke with the Sydney Morning Herald, saying that Covenant was “going great.” He further elaborated, saying that “the director and our producer love it here, not just living in Sydney but they’re loving working at the studio and the technicians and the actors.” Baron also reaffirmed that a further two Alien films are planned after Covenant.

Actor Billy Crudup has also spoken a little with Digital Spy about how he got involved with Alien: Covenant and what it’s like with Ridley Scott:  “I became aware of a role that hadn’t been cast yet, through my agent, and I put myself on tape for the casting director with my particular POV about who this character could be. It just happened to pair up with Ridley – it’s my good fortune.

Working with him has been so kick-ass and I think he’s a really fascinating filmmaker and presence – a collaborator. He’s got a very clear idea about how it will be told cinematically.”

Thanks to Stolen and SuicideDoors for the news! What do you think of this latest report? Is this a possibility you’d be interested in seeing for Alien: Covenant? Let us know below!

Update 10/06/2016 – The spoiler has since been removed from The Playlist article with the notation: “Spoiler removed at the request of the studio.”