New Alien: Covenant set photos reveal extraterrestrial massacre! The Daily Mail website has just uploaded a number of pictures taken at a quarry in Sydney. They show what appears to be the aftermath of a massacre. There appears to be a mix of scorched, as if petrified, humanoids (possibly Engineers themselves?) and aliens, not the capital A variety, locked in their death throes. 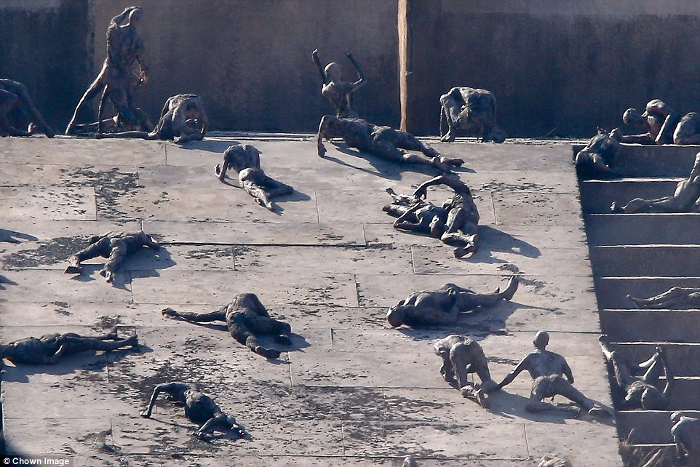 “These are the incredible photos taken from the set of upcoming sci-fi blockbuster Alien: Covenant, which is being filmed at an undisclosed location in Sydney, Australia.

The pictures were snapped at a quarry in the New South Wales capital on Thursday and show dramatic scenes of scorched human bodies twisted in despair and some being attacked by extra-terrestrial beings, similar to those from the Alien film series.

Directed by Oscar-nominated Sir Ridley Scott, the long-awaited sequel to 2012’s Prometheus appeared to be coming along nicely Down Under as production staff were shown against the backdrop of a grand, otherworldly set piece featuring huge blocks of charred stone and mysterious hieroglyphs.

One heart-stopping image shows around two dozen ashen human forms which are eerily frozen in moments of panic and horror as they desperately clamber up a set of steps.

In another shot taken from a greater distance, there is a more complete view of the set which features three tall stone slabs which obscure the greenery and car park behind.

Against the industrial background of the quarry, the set of Alien: Covenant (previously known as Prometheus 2) also features some remarkable aged stone edifices which are engraved with hieroglyph-like writing.

Reflecting a haunting dystopia or end-of-civilisation scenario, several huge monuments appear toppled and strewn across the dry landscape and a tremendously large stone structure of a man’s face is left cracked and half-decapitated.

Juxtaposed next to the modern film machinery – including a large red and white crane, barricade tape and several work vehicles – the unfamiliar set and perfectly still human forms look disturbing and out-of-place.

Elsewhere, a series of huge, tree-like stumps were shown growing out of a barren rocky landscape – and the sheer scope of the design was highlighted by a solitary crew member.”

Several pictures reveal a connection to the Engineer culture, showing the broken remnants of an Engineer monument (as seen in Prometheus and previously pictured at Fox’s Syndey Studios) and Engineer hieroglyphs: 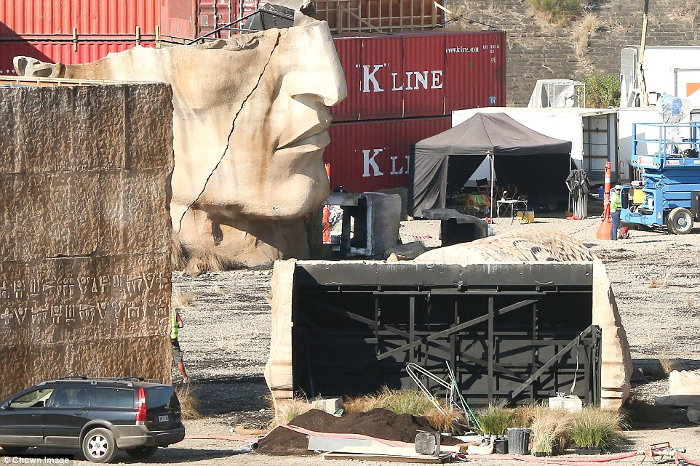 Set pictures taken at a quarry in Sydney show the broken remnants of an Engineer monument.

Is this Paradise or are we seeing another world that the Engineers once shepherded over? Perhaps this is the aftermath of an Engineer experiment gone wrong? What is your take on these latest pictures?