“It’s not to ‘improve,’ it’s make it fun, make it different, make it organically different. So what’s the extension of it that makes sense, that’s exciting? There have been a lot of changes to Stan’s design over the years. These different Predator movies have done different things. Ultimately it’s not about design to me, it’s about the story you want to tell. There are people who are always going to agonize over Iron Man, what color his suit is. Maybe this weapon does a new thing, but if the story is not good I don’t give a sh*t what color the suit is. In ‘The Predator’ we’re doing a lot of upgrades to what you would consider to be the traditional Predator technology and look, but hopefully the story is what’s going to drag people in, not just the attention to the minutiae.”

So it sounds as if we’ll be seeing a new approach this time around! One of Alien vs. Predator Galaxy’s own will be in attendance at a showing of The Nice Guys with a Q&A with Shane Black where we plan on following up on this with a question about which effects house Shane Black intends to use to design and construct The Predator costume design this time around. 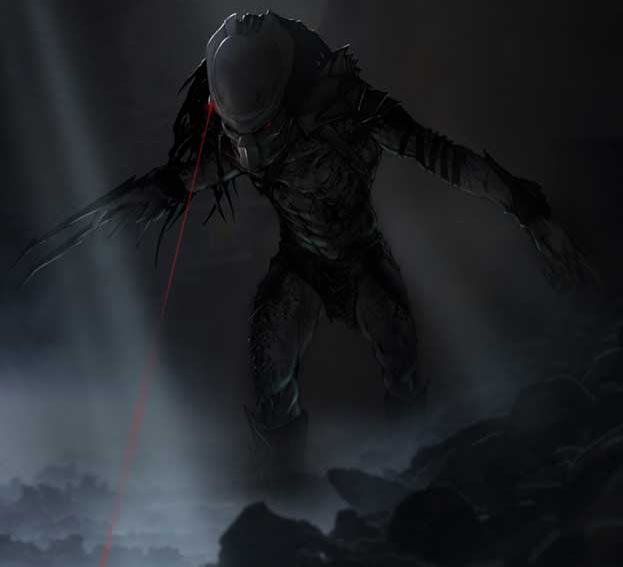 While promoting The Nice Guys, Shane Black has talked about The Predator costume design. Picture is Predators concept art by Joseph C. Pepe.

At the same junket that SuperHeroHype attended, JoBlo was also in attendance and though they didn’t get anything new from Shane Black, they did confirm the recent news regarding when The Predator would shoot and Black talks a little about his mentality in trying to give The Predator back that same feeling of “wonderment, mystery and adventure” that the first Predator had:

“I was reluctant to. If you look at the opening of the first Predator, with the helicopters coming in and landing with the smoke and the native people… It was so compelling because it established a world in which this is still mysterious for you. It’s not a sci-fi world. It was so fresh back then, like a “why didn’t I think of that, what the fuck?” quality to it. I’d like to get back to a movie where it’s three months out and people are like, “Let’s get our tickets now because we’re aware of this, it seems like they put the money and attention into it, it’s not just a knock-off.” Really try to get back to that feeling of wonderment, mystery and adventure. A fresh movie. Without giving away details, that’s been our goal. To say, “What’s the John McTiernan and Joel Silver of this, and how do we get back to that?”

As Shane Black continues to promote The Nice Guys, we will probably hear more and more about The Predator. Stick with Alien vs. Predator Galaxy for the details! Thanks to Johnny Handsome and Kaiju Ninja for the news.