“I made a condition of my participation with Predator that it be the same rating as the first movie, and the first movie was Rated R. In other words, I don’t want to cut away every time the Predator does something violent. I was watching the American version of The Grudge, which was PG-13, and I remember being so frustrated by the fact that everything that was scary in the Japanese version, they had to cut away from in the PG-13 American version.” 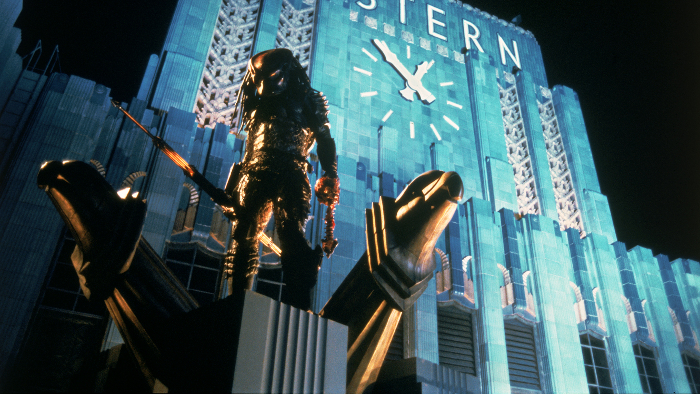 The Predator will be R-rated! According to Shane Black the R-rating was a condition of his involvement with The Predator!

Considering the talk of The Predator being a big event film, something akin to a Marvel release, it was a legitimate concern that The Predator would see a tamer rating to allow the younger audience in (something Fox attempted with Paul Anderson’s Alien vs. Predator but criticism of that PG13 rating led to overcompensation with the sequel Alien vs. Predator: Requiem) however it would appear that Shane Black is sticking to his guns and getting what he wants from 20th Century Fox. And it sounds like he knows exactly what he wants!

Elaborating on it further, Black explained that: “there’s also a sensibility and a sense of brooding menace and we can have fun but there’s an element of horror that’s unmistakable in The Predator,” he continued. “I don’t want to have to compromise it by just treating it like a popcorn film. That said, I hope there’s some popcorn viewing available in it, too. It’s an R-rated popcorn movie, which is the best kind to me.”

Keep checking in with Alien vs. Predator Galaxy for all the latest news on The Predator. You can also follow us via several social media channels so you get the news straight into your feeds as it happens! You can find us on Facebook, Twitter and Instagram.

Update #1 (13/05/16) – ScreenRant has just posted their own interview with Shane Black where the topic of the R-rating and budget came up. Black commented on the success of Fox and Ryan Reynold’s Deadpool was instrumental in the decisions made by Fox: “Before Deadpool everyone was saying exactly the opposite. It’s only been recently that this sort of thing has become more palatable to the decision makers.”

Black also discusses more about the approach his is taking The Predator, again emphasizing the desire for The Predator to be an event film and to be something that reinvigorates interest in the series: “That’s what the goal is here, to take the Predator from a sort of knock-off version that gets a certain amount of money every few years to one that’s more eventized, that you would get your tickets for it months in advance, actually know it’s coming, and say, ‘Yeah, let’s line up and see that.’”

All Predator: Hunting Grounds OWLF Recordings Transcribed!
By Hicks (15-May-20)

Arnold Schwarzenegger Is Returning As Dutch In New Predator: Hunting Grounds DLC!
By Hicks (12-May-20)