Following on from her recent update regarding Neill Blomkamp’s on-hold Alien 5, Sigourney Weaver has stated that Alien 5 is the “most satisfying” end of the Alien story! As part of yesterday’s Alien Day celebrations many cinemas were running showings of the films.

One such showing, at The Town Hall in New York, had the pleasure of Sigourney Weaver’s attendance where she fielded questions from the audience. Inevitably she was asked about Alien 5. Alien vs. Predator Galaxy member CainsSon was in that audience and provided us with the details!

“She speaks of the script as if – as far as she is concerned – it’s happening already, and in her mind is the “most satisfying” ending of the story. When first asked about working with Michael Biehn, and their flirtation/romantic relationship in Aliens, she added “you will see a lot more of that in the next one.”

She continued to say she just wrapped something else with Blomkamp which she can’t talk about, in South Africa. She stated how expansive the Alien 5 story is, and mentioned that, like the other films, Blomkamp’s film has a very particular new vision. 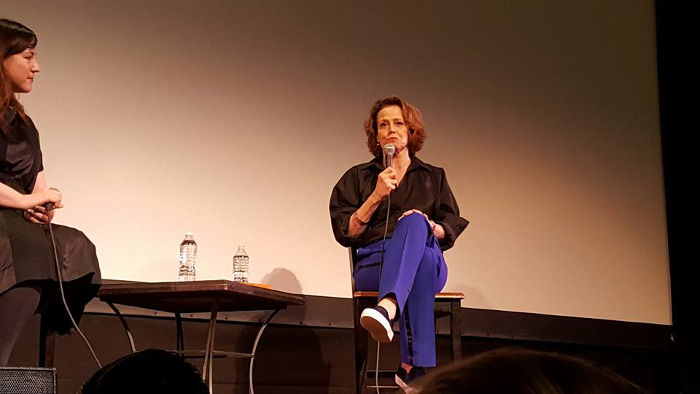 Talking at a Q&A at The Town House in New York, Sigourney Weaver says that Alien 5 is the “most satisfying” end of the Alien story! Picture courtesy of Aswad Corneliu via the Weyland-Yutani Bulletin.

Weaver also talked about Alien 3 and Resurrection and how Blomkamp’s sequel relates to them, stating that the new film wouldn’t “wipe out” those films but “run parallel” to them. This continues to support the current belief that Blomkamp’s project will be an alternate Alien 3 – which if Ripley is returning as the original Ripley and Hicks and Newt are back, it couldn’t be anything other than an alternate.

CainsSon also talked about a response to a rather innocuous question, where someone in the audience asked about the fate of Jonsey the Cat, perhaps hinting that a certain artificial person who also survived Aliens would be rejoining them as well: ” Her response, to paraphrase was: That she imagines that Ripley found her a good home with a friend on Gateway station (musing) but she added “when all that is over they, I imagine the three of them, or maybe the four of them now, will go back and pick up Jonesy.”

With Sigourney on board and it quite likely Michael Biehn as well, how would you feel about seeing Lance Henriksen return as well? Thanks to CainsSon for representing us and passing on the details.