While not quite as grand as the AvP Miniatures Game from Prodos – that one finally hit the shelves last year after much delay – there will be another Alien vs Predator themed board game coming out soon. Simply titled Clue: Alien vs Predator, it will be from a company called USAopoly who specialise in custom-themed board games. This one is based around the popular murder mystery game Cluedo, or Clue as it’s known in America and you will play as a Predator trying to guess where the Queen is. The game will retail for about $40 and will be out in April 2016 in North America.

WHO has the skills and tools to capture the Alien Queen and face off against her offspring? It is up to you and your predator comrades to determine WHERE her hidden lair is and WHAT weapon will be used to subdue her. Is she hidden in the volcano, or the oasis? Will it be Spartan with a whip on the beach, or Wolf with the Combi-stick in the jungle? CLUE®: ALIEN VS PREDATOR™ will startle and surprise you as you solve the mystery of the Alien Queen. 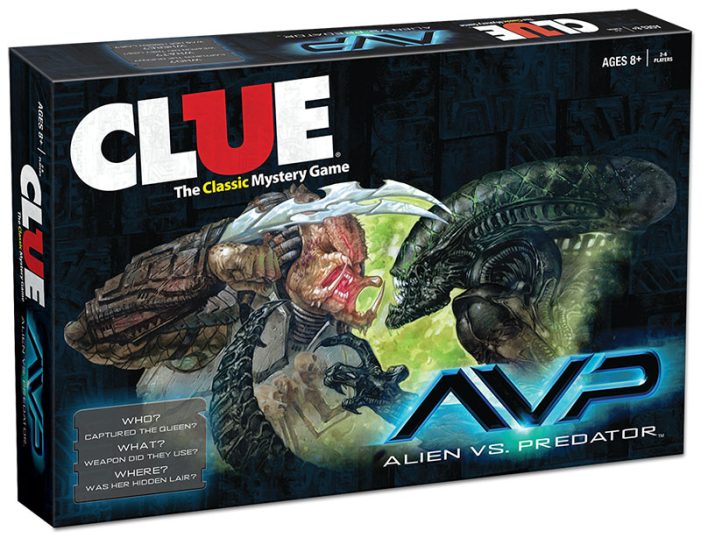 This isn’t the company’s first theme for Clue. They previously did Clue games based around Doctor Who, Supernatural and Firefly. Thanks to LiveForFilms for the tip.

Related News Posts
AvP Miniatures Game Coming Soon!
USCSS Nostromo – Alien: The Board...
New Aliens Board Game On The Way! Another...
Alien vs Predator The Miniatures Game...
Hiya Toys Has a Plethora of New Alien,...