Fred Dekker says Predator 4 script complete via Facebook update. News on Predator 4 has been very sparse since it was first announced back in June of 2014. The last we heard on the project was in August when producer John Davis told Collider “this is the most entertaining way to reinvent a franchise.”

In this small update from one of the Predator 4 writers, Fred Dekker posted a picture of a Predator drawn by 7 year old Angus Herndon with the caption: “A character from the new screenplay we just turned in.”

Very few other details about the upcoming Predator sequel are known. The film will be directed by Predator alumni Shane Black (who played Hawkins and was brought onto the original project to provide some oversight). He is also co-writing the script with Fred Dekker who is perhaps most well known for his work on The Monster Squad. 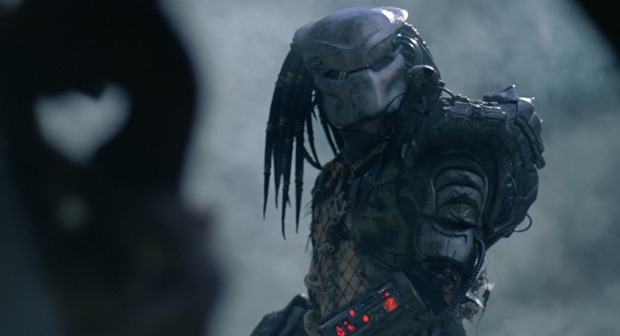 Shane Black’s most recent project has been The Nice Guys, a mystery thriller set in the 1970s staring Ryan Gosling, Russell Crowe and Kim Basinger. The Nice Guys is currently slated for a May 2016 release.

Whilst originally reported as a reboot of Predator, it was later clarified that the project would be a sequel; what Shane Black called an “inventive sequel“. We also know that Robert Rodriguez will not be involved in Predator 4.

And as of June, Arnold Schwarzenegger has not been contacted in regards to appearing in the latest instalment. Although stating he hadn’t be contacted about Predator 4, Schwarzenegger did express confidence in the writing capabilities of Shane Black.

What about you guys and girls? What would you like to see in the new Predator film? Are you confident in Shane Black and Fred Dekker? Let us know in the comments below. Thanks to Johnny Handsome for the tip.