Alien 5 maybe postponed but it isn’t stopping Michael Biehn dishing out a few more details. Whilst talking to Icons of Fright about his role in the upcoming mobster comedy series, 24 Hour Rental, Michael Biehn (Corporal Hicks from Aliens) talked a little about Neill Blomkamp’s Alien 5:

“They’re planning on bringing me and Newt back and at this point Newt will be around twenty-seven years old. I know that every actress in Hollywood is going to want to play this one, it’s really a passing of the torch between Sigourney and this younger actress who would play Newt.”

I would like to reiterate that whilst Michael Biehn has commented previously that he has not actually seen Neill Blomkamp’s script for Alien 5, he did talk to Blomkamp who gave Biehn a run-down of what he wanted to achieve with Alien 5. 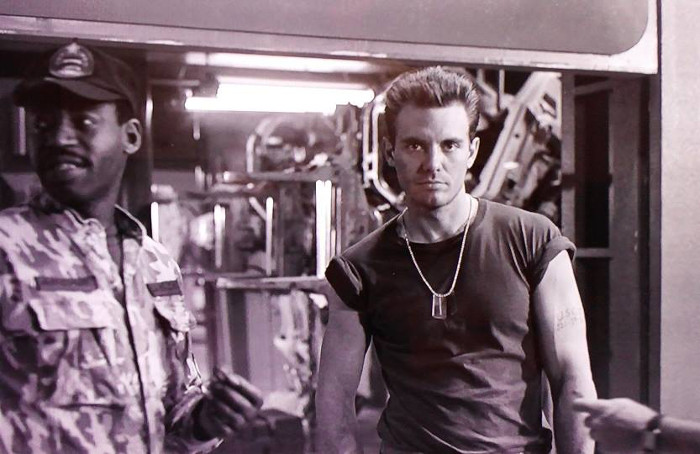 Talking about Alien 5, Michael Biehn (seen here with Al Matthews on the set of Aliens) says: “it’s really a passing of the torch between Sigourney and this younger actress who would play Newt.”

Biehn also commented on the postponement of Alien 5: “I know that Ridley’s focus is on the second PROMETHEUS (now titled ALIEN: COVENANT) and I’m sure that he and Fox both don’t want that and Neill’s movie to come out right next to each other, because they’re kind of two different worlds.”

Alien 5 is currently on hold, pending the release of Alien: Covenant. There has been no further news about the status of Blomkamp’s project since his initial tweet saying that the project was “on hold”. I would like to mention that this was stated as the plan all along, as said by Ridley back in September: “I’m producing it… The design is for it to go out next, after this. This will go out first.”

Be sure to head on over to Icons of Fright to read the entire interview. Thanks to Global Moderator Xenomorphine for the link.

Update: According to a Michael Biehn page on Facebook, Biehn was merely speculating during the Icons of Fright interview: “The press sometimes has a way of misinterpreting what is actually said. When I was interviewed and asked what my thoughts were about the Alien 5 Movie, I was SPECULATING what the Alien 5 story “might” be about. And if i did know the plot point I would certainly not reveal them before the movie was released let alone before it went into production.”

So perhaps the interview was mistranscribed by Icons of Fright as it certainly sounds as if Michael Biehn was talking definitively judging from the text in the interview. Thanks to Foster and SM for the news.

Update #2 – In addition to the above statement from Facebook, The Terminator Fans have also posted an update they obtained from a representative for Michael Biehn: “The interviewer clearly misunderstood the context of Michael’s words and as a result he has sadly been misrepresented, and very much wishes to set the record straight. Anything previously stated was pure speculation on Michael’s part as to where the franchise could possibly head in the future; with ideas that have already been speculated by fans.”