Dark Horse have today announced a new Aliens comic series at the New York Comic-Con due for release in April 2016. Titled Aliens: Defiance, the action/survivor/horror comic is set between the first two Alien movies and follows an injured Colonial Marine called Zula Hendricks who fights the xenomorphs. It will be written by Brian Wood with art by Tristan Jones and the story will involve Weyland-Yutani dispatching a team of Synthetics to investigate a floating derelict freighter. Zula is the main representative of the Colonial Marines and the team soon discovers xenomorphs on the spacecraft. You can read an interview with the writer and artist over on Newsarama.com where they reveal lots of details about the series. Here’s the cover art from artist Massimo Carnivale: 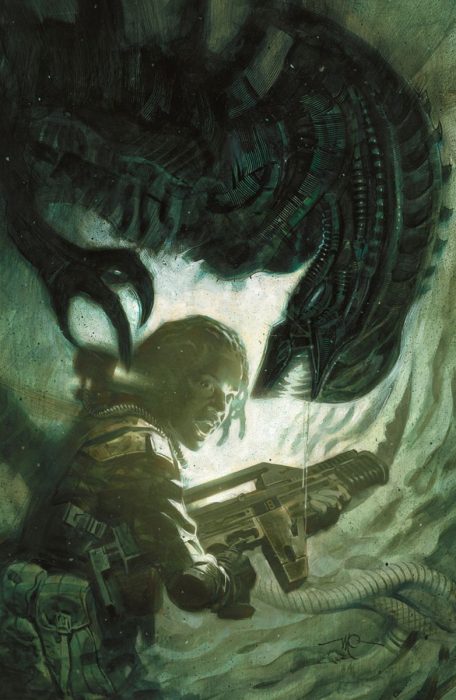 Wood goes on to say there will be a cameo appearance from Amanda Ripley from Alien Isolation: “Pretty early on… I would say more or less concurrent with the Alien: Isolation story. We even have a cameo with Amanda Ripley at the start of our story. She and Zula are known to each other. If you want to talk dates, the events of Alien occurred during the in-story year of 2122, with Aliens being 2179. We’re at around 2136 or 37.” Aliens: Defiance is its own story so it won’t be tied to other franchises like the recent Fire & Stone series. Look out for the Aliens comic in April 2016.