News on Shane Black’s upcoming Predator 4 has been quite scarce since the initial announcements last July. Whilst originally touted as a reboot, Black came out and called the upcoming film an “inventive sequel“. Collider spoke to the Predator series producer, John Davis, at the Television Critics Association where Davis was promoting his new TV series, The Player and asked him about Predator 4:

“Shane’s got a writing partner, Fred Dekker. They’ve been doing it together and Fred’s great. The two of them together, they’ve been in the business for a long time, but the writing is so fresh, the perspective is so fresh. I’m telling you you’re going to get something you don’t expect and you’re going to say, ‘This is the most entertaining way to reinvent a franchise.” 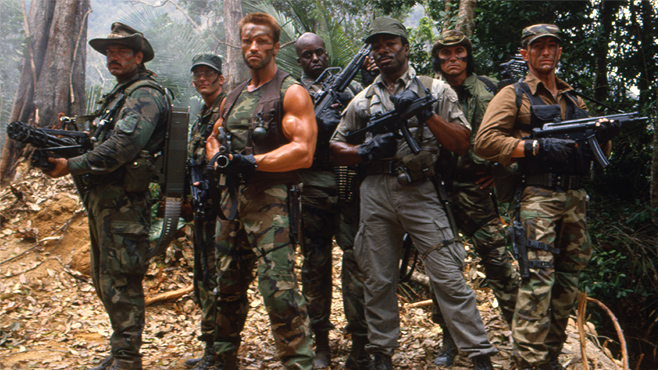 Shane Black also played Hawkins (second from the left) in the original Predator.

Again Davis avoids calling Predator 4 a reboot and Collider makes a point of the phrase “reinvent the franchise” but what I really took notice of is the way Davis refers to Black “looking at it from a different light.” Reading into it a little I would suggest that perhaps Shane Black’s Predator 4 will try to break the mould and try something different from the previous films.

Unfortunately we still don’t have any information on when production on Predator 4 will get under full steam but be sure to keep checking back for further news. Thanks to ace3g for the tip.