The guys over at Perfect Organism: The Alien Saga Podcast have posted up a short interview they conducted with Charles Lippincott, the marketing consultant for Ridley Scott’s Alien. Charles is quite active on Facebook and posts a lot of the photographs he took whilst working on Alien (amongst other films including Star Wars and Judge Dredd):

“JM: Can you tell me how you got involved with ALIEN?

Charles Lippincott– I had a good relationship with the folks over at 20th Century Fox because I was working with them on Star Wars. When Star Wars came out, a lot of Fox Executives got big career bumps, like a corner office or a coveted parking space that came with a nice title and salary jump. At Lucasfilm, a new CEO was brought on, Charley Weber, and my position got cut back and split up. When Fox saw that I wasn’t being taken care of by Lucasfilm, they gave me a bonus, and asked if I wanted to work on a project with Ridley Scott and Gordon Carroll. It was a science fiction film with a script by Dan O’Bannon, who I knew and liked from Filmex. I had worked with Gordon before on Pat Garrett and Billy the Kid, and liked working with Gordon also, so I was very interested in the project. After reading the Alien script, I definitely wanted to do the film.” 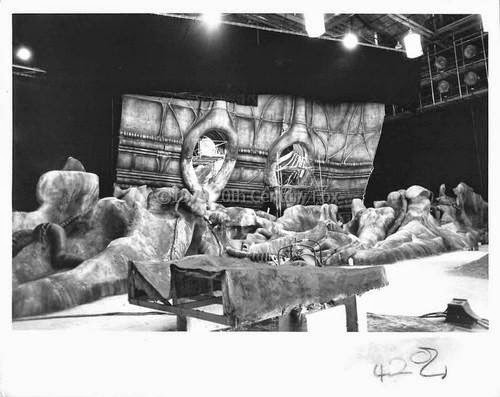 A polaroid from Charles Lippincott’s vault.

Charles Lippincott talks more about his role on the set, his opinions whilst working on the film and more. Be sure to check out the entire interview and whilst you’re at it, also check out the Perfect Organism: The Alien Saga Podcast episodes.