Yesterday NECA posted up their official images for the upcoming NECA Aliens Series 5. To be released in August 2015, Series 5 will be the second time that NECA has released a figure of Ripley, this time from James Cameron’s Aliens. Series 5 also includes half of Bishop and singles of Alien Warriors from the Genocide 2-pack:

Ripley features the likeness of Sigourney Weaver and comes with bandolier accessory plus the makeshift flamethrower/pulse rifle hybrid she jury-rigs to battle the Queen. Bishop features the likeness of Lance Henriksen and is based on the android’s appearance after the Alien Queen’s attack. He comes with an open Xenomorph egg and facehugger with bendable tail. The Xenomorph Warriors from Aliens: Genocide come in both black and red versions.” 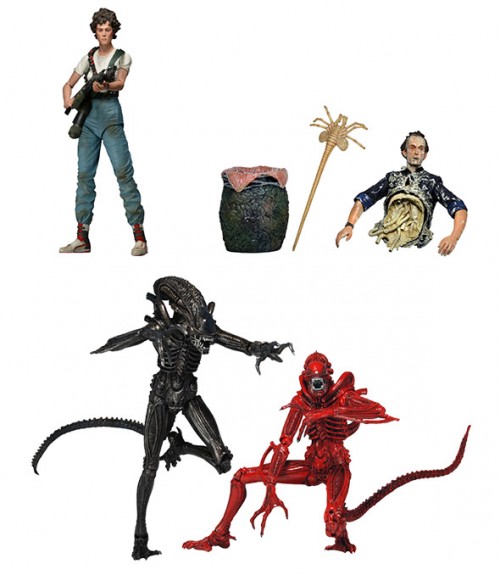 NECA have also recently teased 25th Anniversary Dark Horse Comic Predator and a 1/4 scale Alien figure as well this re-release of an old Kenner Aliens vs. Predator 2-pack and this pack of Eggs and Face-Huggers.