The last writer to touch an Aliens vs. Predator comic was none other than Randy Stradley, the very man responsible for starting the license off.  In Aliens vs Predator – Three World War, Stradley wrapped up the current story-arc and the story of Machiko Noguchi. The series ran from January 2010 to September 2010. And that was it. Until Dark Horse started its Fire and Stone series and Chris Sebela stepped up to the plate to write the first Aliens vs Predator comic in nearly 5 years.

Having spoken to some of his fellow partners-in-crime – Paul Tobin and Chris Roberson – for the Fire and Stone series, we hunted Chris Sebela down to ask him some questions on his work for Dark Horse’s Aliens vs Predator – Fire and Stone.

“Aliens vs Predator Galaxy – Were you also using these “lesser aliens” for AvP? I remember some earlier cover art depicting the Deacons from Prometheus. Was the entire series using the Deacons?

Chris Sebela – Yeah, initially we were using Deacons and sort of tracing their evolution into full-on xenomorphs, using the Deacon we see at the end of Prometheus, but that hewed too close to what they were talking about for Prometheus 2, which makes sense. But like I said, that pushed us to come up with a new angle and that gave us the freedom to use as many xenos as we wanted without having to trace any lineage or anything, so I think it was a decision that was for the best in the end.” 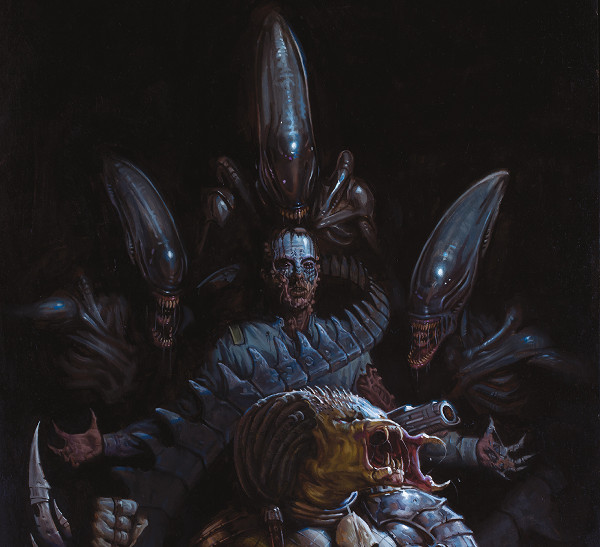 Early cover art for Aliens vs. Predator – Fire and Stone depicted Deacon style creatures that were later replaced with Aliens in the final release.

Chris talks about how he got into comic writing, his first encounter with the Alien series, the AvP games and a lot of talk about Elden amongst much more. Be sure to check out the interview in its entirety! And if you haven’t already, go back and check out our interviews with Paul Tobin and Chris Roberson as well!