Early in March 2015 the team from Creative Assembly took to the stage at Game Developers Conference in San Francisco. The footage of the original Alien Isolation pitch video and the third person perceptive came from this event. The conference in its entirety has now been posted up in the GDC Vault. Included in the conference video is a non-handheld recording of both previously mentioned pitch video and third person footage. The conference was hosted by Al Hope, the Creative Lead for Alien Isolation.

“When we set out to make Alien: Isolation our goal was to make the Alien game we had always wanted to play. A game that took the player back to Ridley Scott’s original haunted house in space. A game where just one Alien could be terrifying and provide a meaningful encounter to an underpowered and underprepared player.

This talk will reveal how we went about delivering this new approach to one of the most recognized icons in cinema and the story of how we overcame our own fear and uncertainty to create a new type of horror experience. We will show the journey from initial vision to our approach to utilizing the creature’s senses to ‘re-Alien the Alien’ and how creating a visually and aurally immersive world was critical to entire experience.” 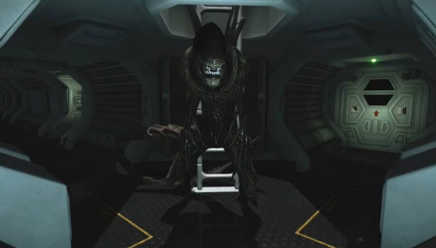 The Alien Resurrection-style Alien in the original pitch video.

It was really nice to see the footage in much better quality. I’m certainly glad they moved away from the third person perspective. I can see where they were trying to make it work, with the close angles on Ripley (inside the vents for example) to try and get that claustrophobia but watching the footage, I can’t see that approach having any of the visceral effect on you as the final first person perspective did. I’m so thankful for the amazing quality of the game (if you haven’t already, you can check out our review of Alien Isolation). Al Hope also talks a lot about the ethos of the game and the history of it which we’ve heard before. Be sure to check out the whole conference.