Titan Books have been kind enough to provide us with a look at some of the images inside their upcoming book, Alien – The Archive, written by Mark Salisbury:

“Alien is one of the most original, thrilling, and beautiful franchises in cinema history. From Ridley Scott’s elegant horror masterpiece and James Cameron’s visceral and heart-poundingAliens, to David Fincher’s nihilistic Alien3, and Jean-Pierre Jeunet’s twistedAlien Resurrection, these are the films that birthed a monster and a cultural phenomenon.

Alien: The Archiveis a beautiful celebration of these landmark films, delving deep into the process of how all four films were created. From the earliest script ideas to final cut, this book showcases the making of the series in exhaustive and exclusive detail. Featuring storyboards from Ridley Scott, exclusive concept designs from Ron Cobb and Syd Mead, behind-the-scenes imagery of the xenomorphs being created, deleted scenes, unused ideas, costumes, weapons, and much more.

This must have retrospective also includes brand new interviews with Ridley Scott, Sigourney Weaver, H.R. Giger, Jean-Pierre Jeunet, Jenette Goldstein, and those whose vision and originality created a cinema legend.

This book is for all fans of Alien, art lovers, and cinema and science fiction historians. Alien:The Archiveis the final word on the series and showcases the breathtaking creation of a terrifying and beautiful filmic nightmare.” 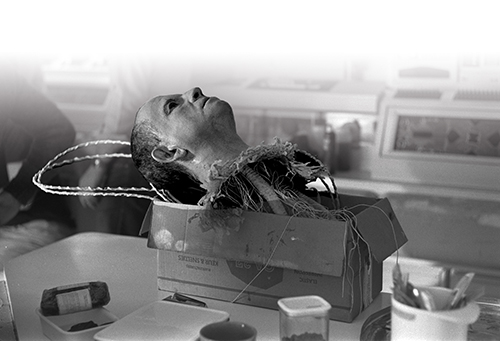 Some of these pictures are familiar and some I’ve never seen (like the above image of Ash’s head). Check out all 11 pictures provided to us below. Alien – The Archive is due out on the 31st of October. The next Alien novel, River of Pain, is due out on the 25th of November. And for those who have missed it, The Art of Alien Isolation was recently released as well.