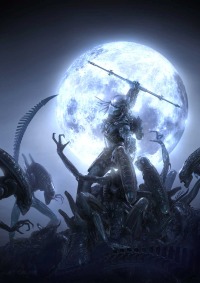 There’s a new interview over on DSOGaming with Kevin Floyer-Lea, who is the head of programming at Rebellion and also worked on 1999’s Aliens vs Predator as well the 2010 version. The interview is about the technology behind Sniper Elite 3 but he also mentions that Rebellion are still interested in making a new Aliens vs Predator game. We last heard from Sega in 2011 that there were still things to be done in the Alien universe before they could revisit a sequel to AvP – i.e. Aliens Colonial Marines and Alien Isolation. Here’s the excerpt:

DSOG: One of your most successful games was Aliens vs Predator. Both the Jaguar and PC versions of it were stunning. Would you ever return to that franchise?

Kevin Floyer-Lea: Here at Rebellion we’ve got a particularly strong attachment to the AvP universe, so it could happen. We had a lot of fun playing with people’s minds on the original game by randomising spawn positions so what was a health pack turned out to be an Alien on your next play through. So personally I’d love to see an AvP game with fully procedurally generated levels, where you literally never know what’s around the next corner.

2010’s Aliens vs Predator was in development for years before they announced it and this interview does confirm that a new AvP game is not secretly in development, at least not with Rebellion. When Aliens vs Predator was released it did quite well sales wise and got average to positive reviews. My memory is a little hazy but I’m pretty sure Sega dropped support for it a month or so after its release. So could a new Aliens vs Predator come out for the likes of X-Box One and PS4 in the near future and could Rebellion return to the franchise? Despite some of the criticism from fans it received, we should be thankful it didn’t turn out as bad as Colonial Marines. I could definitely see a new AvP game on the cards at some point but whether Rebellion is involved or not remains to be seen. Thanks to Spoonman101 for the news.