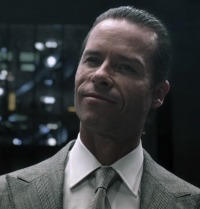 There’s some minor Prometheus 2 news over on IGN who have interviewed Guy Pearce about his new movie The Rover. Pearce says he’s open to returning as Peter Weyland in the Prometheus sequel. Yeah, I know what you’re thinking… How can he return when he died in Prometheus but I suppose they could still bring back the younger version of Weyland in a flashback or something. Or he could take part in the Prometheus 2 viral campaign like the TED Talk for Prometheus. Weyland Industries is still very much at the core of the Alien/Prometheus series so this wouldn’t be surprising.

The question is, would Pearce be down to come back for a sequel? “I’d love to go back and play that character again,” Pearce said. “To work for Ridley again, you know, he’s great — really wonderful to work for. So yeah, I’m very curious to see what he will do next with it.”

In Prometheus, Weyland’s ultimate goal was to achieve immortality — but is such a thing possible in the Prometheus universe? “Well,” Pearce surmised, “based on my character’s request for immortality and then getting whacked in the head with Michael Fassbender’s head, uh… no. [Laughs] But I think it’s possible. I just think it may not be for Peter Weyland. I mean, who knows? When you look at science fiction and the ways in which you can cut the pie and things can develop — technologically speaking, etcetera — anything’s possible, really, isn’t it? Particularly with Ridley at the helm.”

We last heard Ridley Scott was currently scouting for locations in Australia and Prometheus 2 is still rumoured to be opening in March 2016. Thanks to Lemonade for the news.