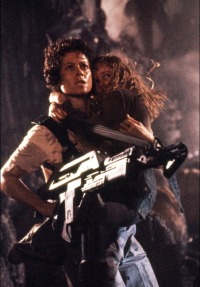 Could Ripley Return for Alien 5?

Actress Sigourney Weaver attended the Hero Complex Film Fest in Hollywood last weekend and between screenings of Alien and Aliens, she took to the stage to answer some questions. She talks about the Alien series as a whole and her character Ripley and of course, no Q&A session would be complete without the possibility of Alien 5 coming up. She seems very open to possibility of returning as Ripley in a potential Alien 5 movie.

“I feel after going to a couple of these Comic Cons and meeting so many fans who are so passionate about the series, passionate about Ripley — that there’s more story to tell; but I don’t know how to do that. I don’t think Alien belongs on Earth popping out of a haystack, which is where I was afraid it was going to go. I feel it should take place in the far reaches of the universe where no one in their right mind would go. There are very few filmmakers that I can think of that I would want to entrust this to. But I can think of a couple… I feel there’s a longing in certain groups of fans when I meet them for the story to be finished because we really left it up in the air and I feel a bit badly about that because I was part of that decision making process. I didn’t want to make four and five in a bundle. I think it’s hard to make these films all in a big lump. You need time to sort of let things resonate so I can imagine a situation where we could at least finish telling her story. I think that would be very satisfying at least to me — although I haven’t done anything about it; but I can understand why that could happen and I certainly know young filmmakers who are interested in doing that. So we’ll just have to see what happens.”

In the past, Sigourney always spoke about returning to battle the creatures on the xenomorph homeworld. That, I agree with. Alien 5 shouldn’t take place on Earth but a distant planet somewhere. So what do you think? Could an Alien 5 film featuring Sigourney Weaver be on the cards at some point in the future? With Prometheus 2 rumoured to be scouting for locations,I suspect we won’t see Alien 5 for a long time. Nonetheless, it’s still nice that’s she’s open to the possibility. Thanks to The Ultimate Predator for the news.