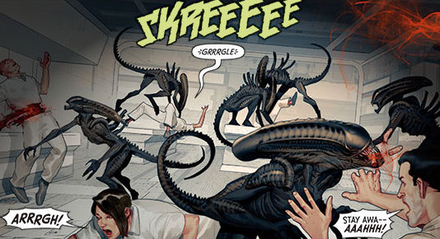 “The “Fire and Stone” line will include five books in total, with the fifth still unrevealed. “Prometheus” will be written by Paul Tobin, with art from Juan Ferreyra. “Prometheus” #1 is set for release on Sept. 10, with subsequent series then launching biweekly in this order: “Aliens,” “Alien vs. Predator” and “Predator.”

Comic Book Resources also have the un-coloured interiors by Patrick Reynolds for Aliens and Chris Mooneyham for Predator, making for 12 pages of Aliens/vs/Predator preview goodness. Thanks to Ultramorph for the news.