We’ve recently been covering the upcoming miniature Alien vs Predator game from Prodos Games. Friday saw their Kickstarter page go online and they passed their initial goal of £35,000 within hours. They’re currently at just over £110,000 and as their funding climbs higher, pledger’s are receiving further benefits and more models are being unveiled: 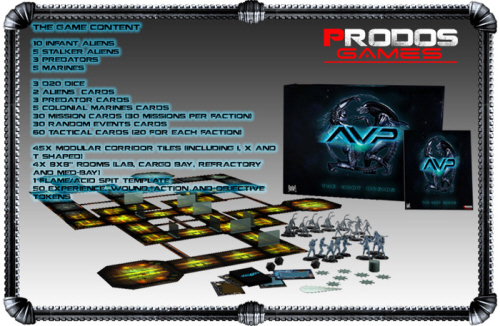 “If successful this KS project will allows Prodos Games Ltd to produce the AvP The Hunt Begins Board Game (which will be produced in standard plastic 1 piece format for late 2014 release) in a bespoked and limited (to KS) fashion specifically for the model connoisseur and collector alike. We will utilize our Procast model making technique to make the high quality and detail multipose and official 28mm polyurethane miniatures of these seminal icons of screen and prose. As well as the cutting edge miniatures, the KS Exclusive AvP The Hunt Begins Gamers Collection Edition will be packaged in a deluxe KS-only box and include exclusive tokens and cards.

If we unlock the stretched goals, the KS project will also allow us to make faction specific themed objective markers as well as a Hardback version of the AvP Wargame Rulebook and speed up our production plans (by over 18 months) meaning we can produce miniatures of, for example, the Predalien, Alien Warriors and even potentially, cyborgs and colonial civilians, well ahead of schedule. In North and South America the KS Pledges will be distributed by CMON.”

By donating £75 then you will be effectively paying for a special KS version of the initial box release with lots of resin models in various poses. Many of the extra goodies have been unlocked with much more on the way! I’m breaking my Kickstarter virginity on this and I hope many of you will be joining me! The campaigns ends on the 28th of November. Get donating!!