Update: It appears 20th Century Fox has removed the new clips. The site in question posted them by mistake.

Two new Prometheus clips have been released over on TheDailyBeast.com. The first clip involves David examining the urn. The second clip is the one we already saw with the Prometheus landing on the planet and the other new clip features the characters racing back to the ship before the giant storm engulfs them. 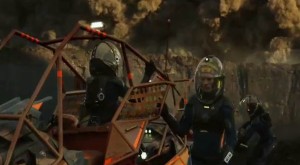 Thanks to seeasea and ChrisPachi for the news.