20th Century Fox has released yet another new image depicting one of the transport vehicles that we will be seeing in Prometheus. The RT01 transport comes with an integrated bio-nomic telecom unit, reinforced touch screen blast-shield, carbon matter sensors, titanium-alloy coated armor, split axle suspension and more. Check the full diagram below: 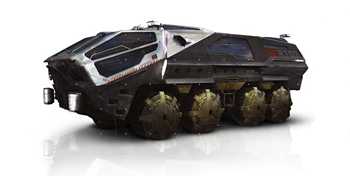 Additionally, several new interviews went live today. First is an interview with actor Guy Pearce about his role in Prometheus. It reveals some details about production and whether or not he thinks Prometheus is a prequel to Alien: “It’s not a huge role, so I came on board in the middle of their shoot, and was just there for about a month in the middle, I guess“. You can read the rest of the interview here. Second is a brief interview with Ridley Scott and the Prometheus cast. Make sure to watch it after the cut.