Today, Sega has revealed the box art for the upcoming Aliens: Colonial Marines game. You can find high-res shots of the artwork on PC, Xbox 360 and PC as well as the full press release by clicking the image below. Check out all the versions here. Also be sure to let us know your thoughts on the artwork in our forums. 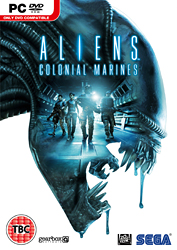 In related news, Gearbox Software CEO Randy Pitchford has talked about the game’s delay & Prometheus during a recent interview with Playstation. You can read the full thing here. Thanks to Sega for the news.

Today we are excited to reveal the pack fronts for SEGA’s highly anticipated Aliens: Colonial Marines™, featuring you and your friends as the ultimate badasses against the deadliest killers in the galaxy.

In partnership with Twentieth Century Fox Consumer Products and developed by critically acclaimed studio Gearbox Software, Aliens: Colonial Marines will bring new levels of bone-chilling suspense and adrenaline-filled action to the renowned franchise. The game pits players against the universe’s ultimate alien killing machines, the Xenomorphs, in claustrophobic environments guaranteed to produce blood curdling thrills that the movie is renowned for.

Aliens: Colonial Marines begins with an ostensibly abandoned ship, the U.S.S. Sulaco, recovered in orbit around LV-426. Players lead a group of highly trained United States Colonial Marines as they board the deserted craft to uncover the fate of the crew. They will have to fight to survive unspeakable horrors and their own anxieties as they chase down the truth behind a galaxy-spanning deception that places humanity at the mercy of the most murderous and deadly species in the universe. Aliens: Colonial Marines features authentic environments, such as the surface of LV-426 and Hadley’s Hope, weapons inspired by the film series and is designed to provide an exhilarating and engaging new chapter in the Aliens universe.

Aliens: Colonial Marines is scheduled for release in the Autumn of 2012 on Xbox 360®, PlayStation®3 and PC.“